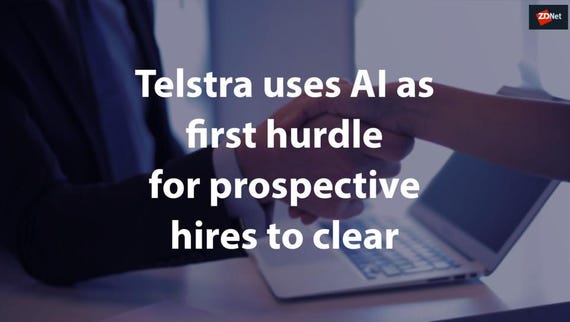 Telstra has said it has been using artificial intelligence (AI) to filter through the 19,000 applications it received for its extra 1,000 temporary call centre positions in Australia that were announced by the telco last month.

Group executive of transformation and people Alex Badenoch said the telco had been able to move from screening to first offers in two weeks, thanks to its AI-enhanced recruitment process. All applicants were required to record a video interview which was ingested as text by the algorithm. They also had to complete a "game-based cognitive test that measures candidates against the skills needed for the role".

"The AI takes the information provided in the video interview and the cognitive skills game and categorises candidates based on an assessment score. Those in the top-tier progress directly to hiring managers for review, without the need to involve a recruiter. While those in the tier below go to a recruiter for further assessment," Badenoch said.

"This approach allows our hiring managers to review candidates at a time that suits them so they can continue to focus on delivering for our customers at this busy time."

Badenoch claimed the system was free of bias or subjectivity, and said it was received well by applicants.

"In addition to the use of AI, we've also redesigned our training to comply with social distancing guidelines. All training is now being delivered virtually, with trainers facilitating large group webinar-style sessions, and new recruits completing self-paced digital courses," she said.

The telco also said on Wednesday it would hire an extra 2,500 temporary roles, split between itself and its partners. They will be comprised of contact centre jobs and back of house specialist roles, Telstra said.

"We're also reaching out to our alumni network who have some of the specific technical skills we need at this time, such as network engineering, software engineering, data and analytics," Badenoch added.

Last month, Telstra said it was giving all of its home broadband customers unlimited data until the end of April, as a response to the coronavirus pandemic sweeping the planet.

The company also said it would be pausing its planned job cuts for six months, as well as suspending late payment fees and disconnections until the end of April.