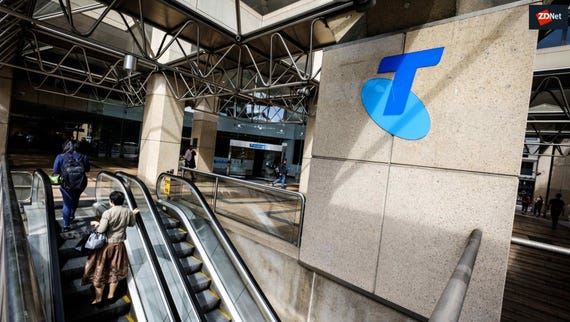 Telstra has unveiled a prototype 5G smartphone that is the size of a regular smartphone, which it is testing on its live 5G commercial production network, as well as on an HTC 5G smart hub powered by Qualcomm technology.

The 5G smart hub will be launching sometime in the next calendar year, with Telstra network engineering executive Channa Seneviratne calling it a world first to have a commercial device running on a sub-6GHz 5G network.

Telstra has been working on the smart hub alongside Qualcomm and HTC, Seneviratne said. He added that the telco is also working with a number of handset manufacturers on other 5G smartphone prototypes.

Seneviratne told ZDNet that these handset manufacturers include HTC, ZTE, and Inseego.

"We want to work with all of them, but in terms of what we can say we can only talk about the handset manufacturers you see up here today," he told ZDNet.

"But rest assured we'll be working with all of them."

Seneviratne said that Telstra now has 130 5G towers on air out of its planned 200 5G sites for 2018, with the latest ones being in Hobart and Launceston. All of these upgraded sites have been enabled with gigabit LTE for consumers to use with their current devices in the meantime.

The set of 5G announcements follows Telstra last month achieving the first live 5G connection in Australia using a commercial 5G chipset and a smartphone in partnership with Ericsson and Qualcomm.

Telstra utilised its 3.5GHz spectrum, along with Ericsson's 5G network software, and Qualcomm's 5G chipset and device, with Seneviratne saying it takes 5G "from the lab into the street".

Seneviratne on Wednesday added that he doesn't expect the Australian government to auction off millimetre-wave (mmWave) spectrum until 2020, although Telstra would "love it to be next year".

Speaking with ZDNet in October, CEO Andy Penn said that Telstra is choosing a range of different launch sites for its early 5G network so as to ensure the new mobile network will be able to handle all geographical and population density requirements ahead of 5G smartphone availability next year.

Telstra had in October announced launching the network across Canberra, Adelaide, and Perth after launching 13 sites in the Gold Coast, one in Toowoomba, and one in Brisbane.

Adelaide's first 5G mobile base station is in Flinders Street; Canberra's is in Pialligo, Phillip, Lyons, and Fyshwick; and Perth's first 5G site is in Narrows Bridge in the CBD.

"There's a few things that go into our site selection," Penn told ZDNet.

"We obviously want to make sure that we're covering different parts of the country nationally, and [we are] targeting different topographical, demographical locations, so we launched one in Toowoomba, which is a good barometer of what we need to do regionally and Toowoomba's quite a digital hub."

While Penn wouldn't be drawn on where Telstra will be launching next, he did confirm that the telco's 5G network will be live "nationally" by the end of 2018, with the telco using mid-band spectrum in the 3.5GHz band.

5G will be the key to unlocking the full potential of IoT and a host of other technologies. Businesses can get a jump on their competition if they apply the power of 5G to their products and services first.

By April, Ericsson has predicted that there will be six mid-band 5G smartphones, to be followed by two or more mmWave 5G smartphones by July.

Telstra connects device to 5G with Ericsson and Qualcomm

Telstra has used a Qualcomm 5G chipset and device with Ericsson 5G software and its own 3.5GHz spectrum to achieve a live 5G connection.

Andy Penn on how Telstra is deploying 5G

Andy Penn explains how the telco is choosing its first 5G sites, with the Telstra CEO also outlining recent 5G and IoT trials the telco has done with Linfox and the National Farmers Federation.

Telstra smart cities the focus of next 5G launch

Telstra will activate its 5G mobile network across another regional centre next as part of a focus on smart cities, with the telco also revealing a 5G partnership with the Commonwealth Bank on 'mobile banking of the future'.