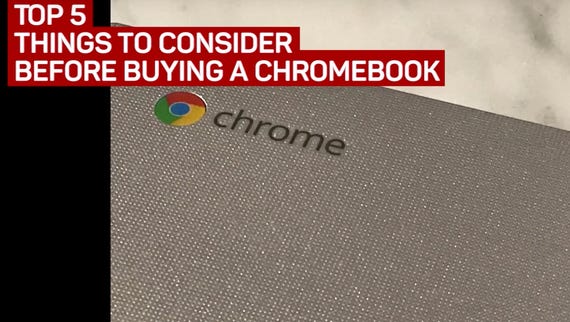 Top 5 things to consider before buying a Chromebook
Watch Now

In 2014, Apple still had almost half of the school market, but Google had them in its sights. By 2016, according to FutureSource, a financial markets research company, Chromebooks had a 58 percent of the education market. Despite Apple and Microsoft's best efforts, Chromebooks are continuing to dominate schools.

Why? Part of it is price. You can get a good Chromebook for a few hundred dollars. Apple has nothing in its price range. Microsoft said it was competing with its new Surface Laptop and Windows 10S, but the price alone, $999, makes it a non-starter.

Besides, Chromebooks as FutureSource pointed out, have a unique combination of virtues. These are: "The strong combination of affordable devices, productivity tools via G-Suite, easy integration with third-party platforms/tools, task management/distribution via Google Classroom, and easy device management remains extremely popular with US teachers and IT buyers alike."

So, as schools get into session, what should you buy? Here are the five best Chromebooks today for both your eighth grader and for your office. I've ranked them in price order, from the most to the least expensive.

At $469, you won't want to send your kindergartner to school with this high-priced -- for a Chromebook -- laptop. But, it will be fine for you or your high-school student.

Looking like Apple's late lamented 11-inch MacBook Air, this is a quality Chromebook for work or school. With a 12.5-inch screen and 1,920 x 1,080-pixel resolution and a 360-degree display hinge, it's a pleasure to use either as a laptop or a tablet.

For connections to the outside world, it uses 802.11ac Wi-Fi and a pair of USB-C ports. Unfortunately, these ports don't support the faster Thunderbolt 3 technology. Still, USB-C is more than fast enough for any task a Chromebook is likely to face.

With a 2.2GHz Intel Core m3 processor, it's no speed demon, but then Chrome OS doesn't need a fast processor. This is also one of the first Chromebooks that comes with native Android app support.

This laptop comes with 4GB of RAM and 64GB of SSD storage. Since, like any Chromebook, it relies on Google Drive for storage, 64GB is more than enough.

If you want a good-looking Chromebook with decent performance, it's hard to do better than the Asus Chromebook Flip.

For a bit less money, you can get the Acer Chromebook for a street price of a lick over $350.

What you'll get for that is a bigger, 13.3-inch touch dual-hinge display with 1,920 x 1,080-pixel resolution. That dual-hinge enables it to be used as a laptop or a tablet. It's best feature though is its battery life. An ordinary Chromebook has a battery life of 8 to 10 hours. The Acer clocks in at an amazing, real-world 13 hours.

That battery life is in part because the Acer uses a 2.1 GHz MediaTek MT8127 processor. This a quad-core ARM Cortex-A7 processor, which uses less power than its Intel rivals. It also means, unfortunately, that the Acer is a tad slower than its competition. More battery life or faster speed? The choice is up to you.

For RAM, it has 4GB RAM. You can choose between 32GB or 64GB SSD for storage.

For Wi-Fi, the Acer uses the now ubiquitous 802.11ac. For ports, it includes a USB-C, without Thunderbolt 3 support and a USB-3 port.

The reason to buy this model is simple: Battery life. It's the best in the market today.

This Dell model is a step down from the Asus, but at $349, it's more affordable. Since it's also MIL-STD 810G rated, this Chromebook can take a licking and keep on ticking. This laptop can withstand extreme temperatures, sand and dust, shock and vibration, and drops of up to 30 inches onto a wooden surface. In short, it's kid-ready.

The 11.6-inch touch display has a low 1,366 x 768-pixel resolution, but that's sufficient for study or work. It also has a dual-hinge display, so it's ready to be used in either tablet or laptop mode.

Another nice feature is the keyboard. It has a good, solid feel to it. The laptop also comes with 802.11ac and a pair of USB-3 ports.

The 1.6GHz Intel Celeron N3060 is on the slow side, but again Chrome OS doesn't require fast processors. This Chromebook comes with 4GB of RAM. For storage, it uses 32GB of fast SSD storage, but there are other Chromebook variants with 16GB ($329) and 64GB ($409) SSDs.

What I like most about this model is its toughness. Schools can be hard on computers, but the Dell Chromebook 3189 is up for the job.

Do you want a solid Chromebook for under $300? What about $289.99, to be exact? Then you want to check out this laptop. It's not the best looking or the lightest, but it delivers the goods at an affordable price.

At 15-inches, the display -- with its 1920 x 1080-pixel resolution-- is bigger than the others I considered. That said, it's not a very attractive screen. You won't want to watch Netflix on it, but for getting homework or office work done, it does just fine.

It's hardware for talking to the external world is a generation behind. This Chromebook has a USB 2 and a USB 3 port. For Wi-Fi, it comes with support only up to 802.11n.

All-in-all, the Acer Chromebook 15 is for people who like full-sized laptops at an inexpensive price.

I think for the first time -- in the more than 20 years I've been using ThinkPads -- I have one in front of me that's the most inexpensive laptop in a round-up. At a street price of $223.99, you'll never see a cheaper ThinkPad.

Like any ThinkPad, it has an excellent keyboard. It does not, alas, have a trackpoint. Instead, it uses a standard touchpad.

Another nice feature is that it comes with an abundance of USB ports: two USB 3.0s and two USB-Cs. For networking, it uses 802.11ac.

The ThinkPad isn't, with its low-end components, isn't the best around. You can upgrade it, but then you lose its chief virtue: A great price for a solid Chromebook.

So, which one is best for you? Well, if you've been reading along, you'll see that each has its good features. To sum up: Best in the field is the Asus Flip; Best battery life is the Acer R13; Toughest against wear and tear is Dell; Acer 15 has the biggest screen; and Lenovo is the cheapest. That said, any of them will work well for work in the classroom, home, or office.

How to pick the best Chromebook for school

Chromebooks are cheap, fast, secure, work well, and can fit in your eighth grader's backpack. Here's what's going on with Chromebooks in education today and how to pick the right one for you and the students in your life.

What were you thinking, Microsoft? The company's just-released Surface Laptop is meant to challenge Chromebooks, but at a starting price of $999, who the heck will buy it? It sure won't be schools, which Chromebook dominates now.

Join Discussion for: The 5 best Chromebooks for school or anywhere...