Buying a new PC or Mac is a major purchase, potentially costing $1500 or more. Top-of-the-line new designs like the Microsoft Surface Book and Apple's MacBook Pro (2016) can easily approach a $3000 list price.

But you don't have to pay that sticker price. With a little preparation and some patience, you can save 30, 40, even 50 percent of that full price without sacrificing quality.

Over the years, I've bought dozens of PCs and have learned a few tricks that I share in this article. I'm partial to Dell PCs and Surface models, but the information here should apply to any vendor.

If you wait till you absolutely have to buy a new PC because your old one is dead or dying, your money-saving options are limited. Your selection (and price) will be whatever's available at that time.

A better strategy? Give yourself a six-month replacement window for your aging but still serviceable older PC. That gives you several months to research buy specs, reviews, and reliability ratings so you can assemble a short list of candidates.

Armed with that short list, you can begin watching prices to see when deals appear. Apple, of course, rarely marks its merchandise down, but you can occasionally get a discount from a third-party seller.

PC makers, on the other hand, regularly offer discounts on all but the newest, most supply-constrained devices. Resellers, including the Microsoft Store Online, also have frequent sales. After watching prices for a month or two, you should have a good idea of what the best available discount is likely to be and can pull the trigger when you find an irresistible deal.

Early adopters get to be the first to try out new technology, which means pay a premium price and are also the first to run into bugs and teething problems with new components. Just ask anyone who purchased a new PC with a Skylake processor in late 2015 or early 2016.

If you're smart, you can wait for six months to a year after a model is introduced. That gives the hardware and OS makers an opportunity to work out driver issues, and it gives you a chance to read reviews and look for reliability issues in support forums.

Personally, I won't buy a product online unless the seller offers a no-questions-asked return policy.

When you buy online, you don't have an opportunity to actually try the model you're considering. Does the keyboard suit your preferences? Are the CPU and graphics processor sufficiently responsive? Is the particular model you received defective in any way?

If there's something that bugs you in the first week or two, chances are you won't get used to it later. So take advantage of return privileges.

Apple's return policy for Macs you purchase directly from the company is 14 days. Dell offers a 21-day return/refund window for new and refurbished products.

If you're buying from a third-party seller, pay special attention to restocking fees, which can be painful if you return an item that isn't defective. Newegg, for example, charges a 25 percent restocking fee for "opened, non-defective notebook and desktop PCs" that you send back within their return window.

Some of the very best deals in the PC marketplace are found in the refurb section.

Refurbs are products that were returned after purchase. They've been cleaned up and repackaged so that they're almost indistinguishable from new merchandise (one exception is Dell's "scratch and dent" category, which offers even deeper discounts if you're willing to accept minor cosmetic flaws).

Typically, refurbs have the same warranty as new merchandise and qualify for extended warranties as well.

How to make the rechargeable battery in your... SEE FULL GALLERY

Dell refurbs are available in the Dell Outlet, which has separate sections for Home and Business. Even if you're looking for a business PC, it's worth checking out the Home selection. It's also worth following @delloutlet on Twitter, where you can regularly find coupon codes to slash the price even further.

Most new PCs and Macs include a basic warranty that covers defects in the first year. While that warranty is in effect, you can typically purchase an extended warranty that covers you for a second or third year. For laptops, the cost of a screen repair or a battery replacement, especially in a sealed unit, can be exorbitant, making a warranty worth considering.

The best time to buy this coverage is with the original purchase. In some cases, that's the only time you can buy it.

And consider third-party protection policies as well. My colleague Jason Perlow has done a roundup of best and worst warranty options that contains some excellent advice.

Do your own upgrades if possible

It's no secret that hardware makers squeeze their very highest margins out of hardware upgrades on custom configurations. If you can do the upgrade yourself, you can sometimes save hundreds of dollars, even if you have to replace the manufacturer-supplied parts.

Your best DIY upgrade opportunities are available in desktop PCs with easily accessible slots for RAM and video upgrades as well as drive bays for replacing a cheap hard disk with a fast SSD.

On modern laptops, especially MacBooks and Surface models, many DIY upgrades are impossible. If you want extra memory or a bigger hard drive, you need to buy a configuration that matches those specs.

But some older MacBooks (including models available new and as refurbs) do allow upgrades. Newer PCs also sometimes offer the capability to increase storage. On the 2015 HP Spectre x360 and the Dell XPS 13, you can replace the built-in storage with a higher capacity part that you buy separately. (Make sure your replacement part is compatible!) The storage in the latest MacBook Air is also reportedly upgradeable, although it's not easy.

You need the right tools and a bit of patience, but it's not a difficult job, especially if you search YouTube for videos that walk you through the process.

On my XPS 13 purchased from the Dell Outlet, for instance, I replaced the built-in 128 GB disk with a newer, faster 512 GB part that cost about $280. That upgrade option isn't even available directly from Dell; and today, thanks to relentless price pressure on SSDs, you can get a 1 TB SSD as an upgrade for that price from Amazon and other third-party sellers. 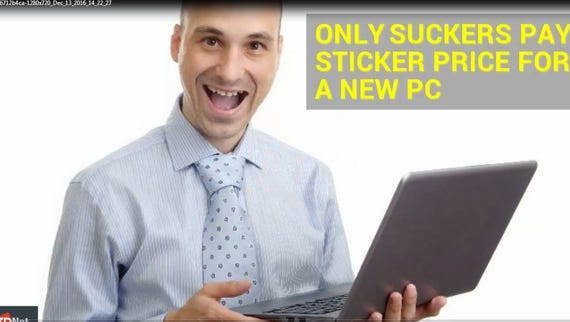 Join Discussion for: The cheapskate's guide to buying a new PC...