The other kind of Java: How coffee is getting a jolt from the Internet of Things

Precision agriculture, a giant database and a touch of theatre deliver custom coffee on demand.
Written by Mary Branscombe, Contributor on Feb. 6, 2019 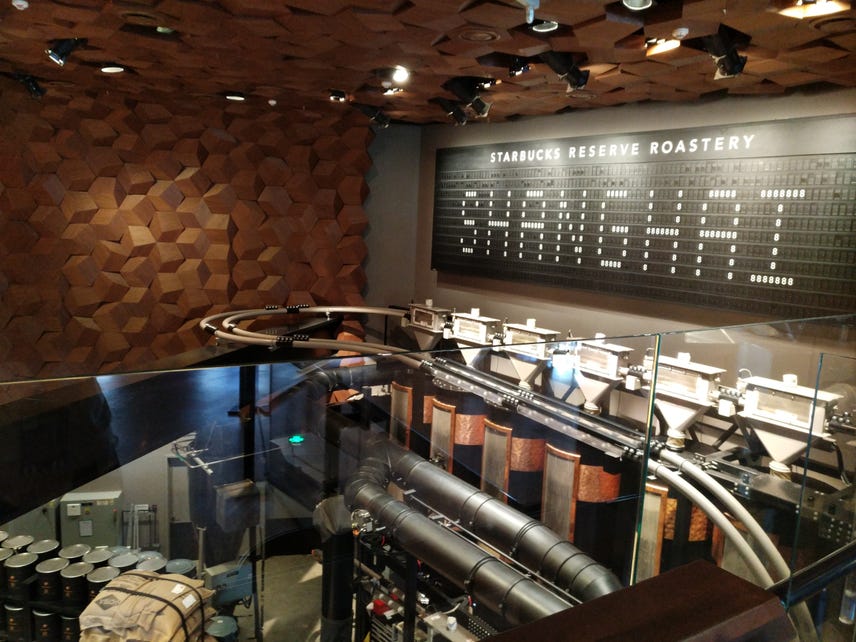 When Roasting Plant founder Mike Caswell worked at Starbucks, his job was increasing efficiency for a chain that had to compete with fast food outlets like McDonald's and Dunkin' Donuts. When he decided to create his own automatic coffee roasting system and put it in coffee stores, one of which has just opened in London, it was more about getting quality by the judicious application of automation.

There's an element of theatre to the coffee roastery in every Roasting Plant store; it's like the way that the Smitten nitrogen ice cream stores in Silicon Valley show off the tanks and pipes that deliver the nitrogen that both stirs and freezes your portion of ice cream on demand. You can't help but think of Willy Wonka and his chocolate factory; transparent cylinders of single origin green beans feed through vacuum tubes into the Javabot coffee roaster where they're tossed like popping popcorn throughout the roasting cycle (anything from 8 to 15 minutes depending on the beans, the temperature and the humidity).

As the beans turn from grey green to pale then dark brown, they double in size and the thin skins fly off and are sucked out into a chaff cylinder where they pile up in colourful artistic drifts (they're destined for local gardens and composting heaps).

The roasted beans drop down to be cooled by ambient air drawn over them and then they're sucked into the matching storage cylinders, rattling down in a steady stream — but not so fast that they break because that would make them oxidise faster. They sit on display for anything from 12 hours to 7 days, which is how long they'll stay fresh, protected by the CO2 given off by the freshly roasted beans; heavier than air, it sits over the top of the column of beans and keeps out the air.

As well as the automation that controls the pneumatics and the roaster and talks to the controllers on each coffee cylinder and in the brewing machines, there's a job-scheduling database tracking what beans are available and what drinks have been ordered. As long as the staff pour in the bags of green beans when they're needed, the system can decide when it needs to roast more beans to keep up.

When you go up to the counter and order your drink, the handful of beans for your coffee are sucked into the base of the cylinder to be weighed and have their volume and density calculated. That's the only part of the process that's not on display; Caswell told us the details are a competitive advantage he'd rather the competition can't walk in and take a look at, and it's another step of the process that can be tracked and adjusted for the individual beans to refine the recipes for better results.

But you can see and hear your beans as they're sucked into another tube, flying over your head and down into one of the two automated brewing and grinding stations thanks to a burst of air that's customised for the weight of the beans and the length of the tube they're in. Based on the density of the beans and the type of drink you've chosen, the Javabot software tells the grinder to adjust itself to one of the 250,000 steps it can set between grinding 3.5g and 26g (practically down to a single bean), then it tells the brewer how to make the coffee.

Unlike many 'bean to cup' machines, that's not just filter coffee; if you're after espresso, flat white, cappuccino or latte, the software sets the pressure to tamp the ground coffee down into the basket, tells it when to lift the tamper back out, what temperature water to use and how long to brew for.

It might feel like sacrilege to mix anything else in with the Jamaican Blue Mountain, which made one of the best lattes I've ever had (although Caswell likes to add a touch of Sumatran beans to his), but mixing the Guatemalan and Ethiopian Yirgacheffe also makes a fabulous cup of coffee. In time, there will be a Javabot app where you can keep track of the combinations you like and see when there are new beans to try out.

All that automation doesn't mean no staff. When we visited the new London location next to Borough Market in opening week, the coffee chief Jen is alternately hunched over the Javabot roaster tweaking the roasting settings for different beans or on the phone to the head software engineer demanding changes in the control software to get even finer control of some aspects of the roast to get exactly the result she wants from the beans she's using in the UK (a slightly different range from what Roasting Plant has at their stores in the US).

When she's not tuning the roasters, she visits the coffee growers around the world, tracking the growing conditions and making sure the workforce is well treated.

The next step is helping the farmers use IoT to improve crops and yields. Precision agriculture and farming IoT are becoming common on industrial scale; the largest Chinese winery uses IoT to track the ripeness of grapes to increase yield and large Napa winemakers stick sensors into the stems of grapevines so they can save on irrigation costs by only watering when the plant needs it.

Microsoft's FarmBeats project works with much smaller growers, using machine learning to predict soil acidity and water levels so farmers know when to water and when to spread lime on the soil to get the most out of their land. For the last decade, San Francisco chocolate makers Tcho has been putting thermometers in piles of fermenting cocoa beans and basic weather tracking sensors on cocoa farms to improve yield and get more data that the chocolate designers can use to understand what the flavour of different beans will be — but that's a much newer idea for coffee.

The best automation doesn't usually replace people, it amplifies them and that's how Javabot is using it. Once the software update comes through, Jen sends another batch of beans through the roaster then races over to grab a handful of the beans as soon as they're cooled to see if she's got the results she wanted. As we leave, she's back on the phone to the coder.

All that technology catches your eye and makes the experience fun; but it also makes for a really great cup of consistently good, extra-fresh coffee.

Alibaba shows off coffee robot during 11.11

Almost 40 percent of the company's coffee stores impacted by breach of its POS system.

In partnership with Alibaba, Starbucks is using its largest store to trial new concepts, including using technologies such as augmented reality.

Taming a world filled with video and audio, using transcription and AI

Trint promises to make the world filled with video and audio more searchable, and make life easier for reporters.

No need to hit snooze.

Agriculture 4.0: How digital farming is revolutionizing the future of food (TechRepublic)

'Happy emoji': How Google Assistant is getting an upgrade with the Pixel 7

'Happy emoji': How Google Assistant is getting an upgrade with the Pixel 7