"Our biggest accomplishment last year was probably advising on and helping to develop systems similar to our [secure data exchange layer] X-Road in Palestine and Namibia, and starting a similar project in Ukraine and Kyrgyzstan too," the executive director of Estonia's e-Governance Academy, Dr Arvo Ott, said of his highlights of the year. He added that developing Armenia's population database also made the list of the organisation's biggest success stories of 2014.

The e-Governance Academy was established 12 years ago, a joint initiative by the Estonian government, the Open Society Institute, and the Bratislava Regional Support Centre of the United Nations Development Programme. As well as employing its own digital governance experts, it also makes use of a network of specialists from public sector bodies, academic and research institutions, private companies, and NGOs to train and advise leaders and stakeholders in using ICT to increase government efficiency, and improve democratic processes to help build open information societies. 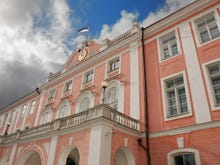 Estonia's experience is valuable for many former eastern bloc countries including Armenia, Azerbaijan, Kyrgyzstan, Moldova, and Ukraine. These countries have been eager learners and in some cases, the students have become the masters. In some areas where Estonia has traditionally been a frontrunner, it's been surpassed by other countries it's been sharing its experiences with.

"Azerbaijan has developed our [Estonian] mobile-ID system even further, and at the moment it's using the most modern system for authentication in the world," Ott said.

In Armenia, Estonia contributed to a two-year project to develop online government services, which ended last year. As a result, the country issued individual personal email addresses to all of its citizens for them to use for communicating with the state. The technology underpinning the country's population database was established, including a digital communication environment for the state's statistics department, so information can be transferred quickly and securely with other government organisations, alongside web-based products to facilitate the use of local police IT systems.

Estonia is also helping Ukraine to lay the foundations for the introduction of e-governance, including developing the documentation and legislation needed to support it, and working on the digital services that will eventually be made available to both businesses and individuals. On a municipal level, Estonian experts have been enlisted to start four projects dealing with electronic document management, mobility, geographic information systems, and call centres in western Ukraine. The biggest part of the project will be creating a fully digital document management system for the municipality of Lviv.

In Kyrgyzstan, the academy is helping to create a plan to reform the country's financial management system based on Estonia's experiences. A prototype e-consulate application system has already been created in Kyrgyzstan, enabling the state to make visa applications and other consular processes web-based.

In Palestine, the academy has helped to introduce the Estonian data exchange system X-Road, which acts as a base on which online government services can be built. According to Ott, in Palestine, Estonian companies are helping to build at least 15 different services using the central system and databases that form part of X-Road. Last year, the academy began working on the introduction of a system similar to X-Road in Namibia too.

X-Road-based services have also made significant progress in the Baltic Sea region. For some time, the Finnish tax office has been using X-Road to exchange data with its Estonian counterparts and at the end of the year, Latvia too is establishing a pilot project using X-Road.

"Right now, we're making preparations in Estonia, Latvia, and Sweden, including dealing with legal nuances in order to start similar cooperations with the tax offices in these countries, like those we already have between the Estonian and Finnish tax offices," said Ott.

"We are not creating a new platform, we are trying to introduce X-Road in the Baltic Sea region. It will supplement the existing cooperation between the tax offices of different European countries, creating new ways for faster data exchange. For example, X-Road would enable getting contact information and information about the tax liabilities of a company registered in another country very quickly. If the Estonian Tax office permits its Finnish colleagues to make such an enquiry, the information will appear momentarily, not after often months long official correspondence between the institutions," Ott said.

He believes that the potential of X-Road is huge, but there are a lot of legal issues which have to be dealt with. The next meeting between the tax offices of the Baltic Sea countries will take place in Sweden, with news about the next developments to come in the project likely to be announced around that time.

For 2015, the academy has other exciting work underway. As part of a joint project with the Estonian Foreign Ministry, Finland's Aalto University, and Norway's Info- and Cybersecurity Institute, the academy is planning to create a strategic index to measure cybersecurity performance in different countries.

According to the academy's cybersecurity program director Raul Rikk, the index should give entrepreneurs, planners, scientists, and other interested parties information about the levels of cybersecurity of a certain state or the levels in specific areas of online security. The specific focus is going to be defined in the first half of 2015 and the pilot project will be tested in a few countries first. If the trial is successful, the index could go global.

"The index would be beneficial with services like e-residency. If Estonia or some other country wanted to provide its e-services outside of its own country to a large number of people, the question - are the e-services of this country secure and reliable? - arises. Can the user be sure that the state is giving enough attention to the protection of its cyberspace?" Rikk said.

Join Discussion for: The students have become the masters: How...