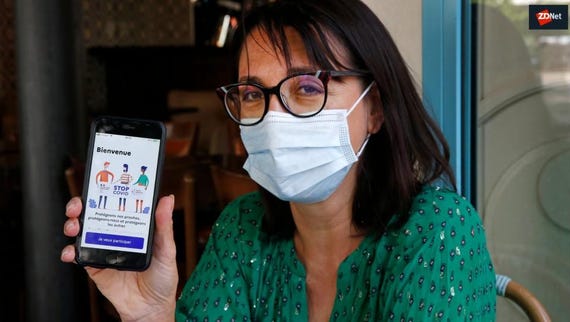 The UK government is changing course in the development of its contact-tracing app, and adopting the API put forward by Apple and Google as a backbone to build the tool, instead of rolling out the centralized model it has favored until now.

The app has been in the works since the start of April, but NHSX – a UK government unit with responsibility for developing best practice for NHS technology – initially decided to snub the tech giants' protocol. Instead, the UK health services pitched a home-grown app, in which anonymous user data would be processed through a central database.

On the other hand, the API developed by Apple and Google is decentralized. Warnings are triggered automatically and locally, on users' phones, to avoid data being processed through a central database.

Arguably, a contact-tracing app based on Google and Apple's technology is technically easier to implement, as it ensures a smooth integration with iOS and Android.

Residents on the Isle of Wight have already been trialing the app in its centralized format for several weeks, in parallel to testing an app based on Apple and Google's API, with mixed results. The Department for Health and Social Care (DHSC) said that the testing had shown "a number of technical challenges" linked to detecting some devices.

While NHSX managed to assess the distance between two users effectively, the app struggled to recognize Apple's iPhones. The tool detected 75% of Android devices, but only 4% of iPhones.

Apple and Google's decentralized model, on the other hand, recognized 99% of devices but lacked precision in its calculation of the distance between two users.

"While it does not yet present a viable solution, at this stage an app based on the Google/Apple API appears most likely to address some of the specific limitations identified through our field testing," said the DHSC in a statement. "However, there is still more work to do on the Google/Apple solution which does not currently estimate distance in the way required."

The next phase of development for the app, therefore, will consist of shifting from its current design towards working with the tech giants in an effort to understand how their technology could fit the needs of NHSX.

Initially poised to launch nationally in mid-May, the NHSX contact-tracing app has ran into a series of delays, leading to mounting rumors that NHSX was considering a switch to Apple and Google's API.

On several occasions, however, the government denied such rumors, and said instead that the trials on the Isle of Wight were going well. The delays, according to ministers, were not caused by technical difficulties.

Marcel Salathé, an epidemiologist from EPFL University in Switzerland, who worked on the Swiss contact-tracing app (which is based on the tech giants' protocol) has previously told ZDNet that he anticipated a change of heart from the UK health services.

"I am frankly puzzled that we are still having this debate," he said. "You want to have a tool that works on phones' operating systems, and Google and Apple control the vast majority of the OS. I assume that countries like the UK will eventually go down this route, because compatibility is key."

For this reason, many other European countries have opted to follow the approach put forward by the tech giants. Germany, for one, initially opted for a centralized approach, before U-turning to Apple and Google's model due to the technical impracticality of developing a home-grown app.

The theory underlying the push for a centralized contact-tracing app was that it would enable NHSX to better manage how warnings are generated to users, in addition to letting experts run analytics on the data to understand how the epidemic is unfolding.

The tech giant's protocol, on the other hand, stops user data from being supervised by external bodies. As such, it has been pitched as one that follows "privacy by design".

Switching to Apple and Google's API is likely to be welcomed by privacy activists, therefore, even if it also means that NHSX epidemiologists will have access to far less data when it comes to studying the spread of the pandemic.

The last-minute switch, after months of contradictory official statements, is also likely to damage public trust in the app.

Speaking about the NHSX contact-tracing app at a conference today, Annemarie Naylor, director of policy at healthcare policy group Future Care Capital, said: "We could have done better in recent weeks to maintain public trust, particularly in the contact-tracing app.

"It is an example of an over-hyped technology that claims benefits that are yet to be seen. There was very high trust in the NHS brand in the past, and this is an important time not to break things."

The new switch to Google and Apple's model is also likely to cause further delays to the launch of the app. The government has stayed clear of announcing a new national launch date, but a minister this week said that the public could expect the app to be released by winter this year.

Lord Bethell, speaking to the science and technology committee, said: "It is still the government's intention to introduce it.

"We are seeking to get something for the winter but it isn't a priority for us at the moment."

Youngjin Yoo, professor of research environment and information systems at the University of Warwick, told ZDNet that although the change was inevitable, the last-minute switch means that significantly more time will be needed before the app can successfully roll out to the rest of the nation.

"When you spend all the IT resources on architecture and design to go in one direction, and then do a 180-degree turn to use a completely different strategy, it's going to be a huge challenge," he said.

In France, a centralized contact-tracing app called StopCovid has launched without using the API developed by Apple and Google.