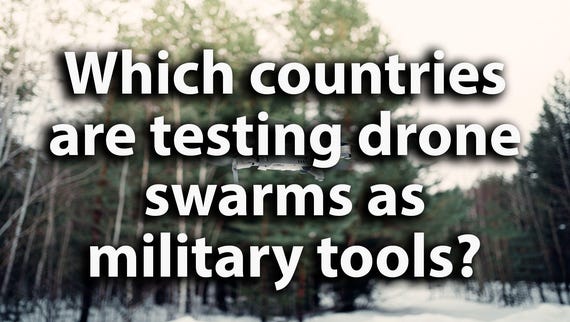 The White House has laid out its plans to give more authorities the power to respond to nefarious drone activity.

The best surveillance drones These drones allow you to keep an eye on operations, individuals, and valued assets from above.

To address the risks of rogue UAS, the White House wants to broaden powers of federal agencies that can already use technology to counter or neutralize bad drones, and expand authorization of the use of drone-detection technology, such as RF jammers, below the federal level.

The plan seeks to "expand where we can protect against nefarious UAS activity, who is authorized to take action, and how it can be accomplished lawfully," the White House said in a statement.

It also wants to authorize the use of UAS detection technology for state and local and, notably, for critical infrastructure owners and operators. Currently, non-federal entities need to seek assistance from authorized entities like DHS to respond to a drone threat.

To avoid detection activity disrupting airspace and communications spectrum, the plan calls for the creation of a US government authorized-detection equipment list. It also wants a federal UAS incident-tracking database for departments and agencies to see the overall domestic threat.

The best photography drones This lineup of aerial hardware fits a variety of enterprise photography and video use cases.

Commercial drones have caused several public safety incidents in recent years. Ahead of the Christmas break in 2018, hundreds of flights were cancelled at London's Gatwick Airport following reports of a drone sighting near the airport: researchers found a drone striking an aircraft could create structural damage to parts of a wing.

A year later, the UK government funded 18 counter-drone and drone technology projects overseen by the UK's Ministry of Defence.

NATO Communications and Information Agency (NCI Agency) in November tested 70 counter-drone systems that track and neutralize drones. One of them used a NATO-controlled drone "hunter" to track another drone and cast a net on the target to bring it down.

In the US, per Associated Press, Newark Liberty International Airport halted all landings in January 2019 after a drone sighting nearby. In 2015, drones crashed on the White House grounds in two separate incidents, prompting calls for the Federal Aviation Administration (FAA) to regulate recreational drone use.

Today, the FAA requires recreational drone operators to register their identity with the FAA if the aircraft is 55 pounds or heavier. About 1.14 million recreational owners registered an estimated 1.44 million aircraft in use in December 2020, according to the FAA.

Biden's plan also calls for a comprehensive criminal statute to establish legal and illegal uses of UAS, and to close loopholes in existing federal law, while creating penalties to deter the most serious UAS-related crimes.