Now, when I say used, I’m not counting devices where I had a few minutes of hands-on time at a tradeshow. That total includes devices I spent quality hands-on time with, for at least days and often weeks or months. In every case, it was long enough to get a solid overview and a feeling for the relative strengths and weaknesses of a very wide range of devices.

I’ve also spent lots of time working with end users at all skill levels, listening to their feedback and helping them adjust to the sometimes steep Windows 8.x learning curve. In this post and the accompanying image gallery , I want to share some of those experiences and the lessons I’ve learned.

Two fundamental observations stand out for me when looking back on all that hardware.

First, the definition of a PC has expended greatly in the past year. The PC industry’s sales may be dropping, but the total is still a large number—every month, OEMs sell tens of millions of Windows-based devices. Increasingly, those devices are blurring the lines between what we used to call a PC and what we currently call a tablet. As more hybrid designs reach the market, we’re seeing a very different answer to the question, “What is a PC, anyway?” 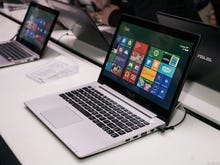 Windows 8 after a year: 21 hardware hits and misses

Over the past year, I've used Windows 8 (and Windows 8.1) on at least 20 different PCs in a broad range of form factors, ranging from a Vista-era desktop to an amazingly light Haswell-powered Ultrabook with a Gorilla Glass cover. Here's a quick tour of these devices, along with my lessons learned from each one.

Second, Windows and its ecosystem have evolved tremendously in the past year as well. There are many more third-party apps today than there were a year ago, including a new wave of apps that the general public won’t see until Windows 8.1 is released in October. The new Mail app, for example, is a profound improvement on its Windows 8 predecessor.

That still might not be enough evolution to satisfy some critics. It might take another two rounds of refinements and new features to get Windows 8.x to the “good enough” level for some people. (Good news for them: Windows 7 is years from its expiration date.)

I get the frustration over Windows 8. I know a lot of people who rejected Windows 8 because of a disappointing and confusing initial experience, even after making a good-faith effort to adapt. After spending three months with the Windows 8.1 Preview and a couple weeks with the Windows 8.1 RTM code, I can tell you it does indeed soften the rough edges of Windows 8 on hardware designed for Windows 7 or earlier. But those rough edges are still there.

To be blunt: PCs designed for Windows 7 are very different from those designed for Windows 8.x. In fact, Windows 8.1 really doesn’t make sense until you start using it on hardware that was built with a touch-first interface as its reason for being. The reasons why Windows 8.1 works the way it does come into even sharper focus when you switch between multiple touchscreen devices with apps, settings, personalization, and data files syncing between them.

I have been covering Windows for more than 20 years, and I cannot remember any other release where using the new OS on new hardware is so crucial to having a decent experience. On older PCs, adding Windows 8.x makes for a mixed bag, in terms of the overall experience. On mobile devices using modern hardware (especially 4th Generation Intel Core CPUs, aka Haswell), the differences are profound. The devices I am using most often these days can boot from a cold start in less than 15 seconds and resume from sleep instantly. They get far better battery life than equivalent models that were built just two years ago, and performance is generally light-years better, if only thanks to Moore’s Law.

But the most important ingredient for mobile devices, in my opinion, is a touchscreen. On the multi-monitor desktop I’m using to write this post, I don’t need a touchscreen—I’ve mastered the keyboard and mouse shortcuts, and the Logitech T400 Touch Mouse has enough gesture support to handle most scrolling (horizontal and vertical). But for everything else, if it doesn't have a touchscreen, I'm not interested.

When I sat down and wrote down the names and model numbers of all the Windows 8.x devices I’ve used over the past year, I found that they fit neatly into these seven categories:

Ultrabooks and notebooks (no touchscreen)

The first generation of Ultrabooks shipped a couple years after Windows 7. The contrast with the best hardware from just a few years earlier, in 2009 and 2010, was eye-opening. I owned and used two of the best examples from that first wave of Ultrabooks: the Samsung Series 9 (which was my wife’s main PC for roughly a year) and the ASUS ZenBook UX31E (which was my main mobile computer for 18 months). They’re still amazingly light and responsive…or so I’m told by their new owners. They’ve been replaced in our household by newer, lighter, faster models that include touchscreens.

Ultrabooks and notebooks (with touchscreen)

I know it’s possible to make the intellectual argument that touchscreens don’t belong on portable devices that have a permanently attached keyboard and trackpad. But that theory doesn’t survive contact with the real world. Different people will use the touchscreen to varying degrees, but I have yet to see anyone who didn’t find some set of actions that are just easier to accomplish via direct manipulation than with a trackpad. And the "gorilla arms" argument turns out to be a non-factor on notebooks. In fact, I guarantee you that after using a touchscreen device for even a few days, you will pick up your old notebook and touch the screen, expecting it do something. The Haswell-equipped Ultrabook I am currently using is one of the best-engineered devices I’ve ever owned. (It also represents another increasingly important trend: high-DPI screen technology.)

Devices in this category have detachable keyboards, allowing them to go from PC to tablet and back with a snap or click. The best examples, of course, are Microsoft’s Surface and Surface Pro with their “click in” keyboard covers. I looked at some other alternatives earlier this year and saw still more variations on the theme at IFA in Berlin a few weeks ago. Even with all that change, you might be surprised when you see which of the devices in this category I have been using most in recent weeks.

Any OEM that introduced a pure tablet running Windows 8 in the past year had an uphill climb, to be sure. One device, Dell’s Latitude 10, stands out for me, because it does something just about no other competitor does anymore, offering a replaceable battery that gives it enough range to go nonstop from the Rocky Mountains to Asia without requiring a recharge. I think the real future of this category, though, is in smaller (7- and 8-inch) devices. Too bad the only device of this size that you can buy today, Acer's Iconia W3-810, is a pint-sized disappointment.

The reports of the desktop’s demise have been greatly exaggerated. I have two tower PCs underneath this desk in full-time production use—one running the software and services I use every day, the other functioning as a Hyper-V test bed hosting up to six virtual machines at a time. My main desktop used to be an HP. Now it’s a Dell. As soon as you remove the covers of the two machines, you can see why. There's a decent case to be made in some non-desktop environments for touchscreen-enabled all-in-ones, but with a couple of exceptions the entrants I've seen in this category are just new spins on old designs. (The Dell XPS 18 is one very noteworthy exception, although it's effectively a very large tablet on a stand.)

I have been trying for years to find a fanless, small form factor PC that could survive discreetly in the living room, running Windows Media Center. I finally gave up and just hid a well-built, quiet tower PC in a corner. And then, earlier this year, I discovered the Intel NUC (Next Unit of Computing), which is an impossibly small fanless PC. If only it had appeared five years earlier.

The good news is, Windows 8.1 runs on a Mac. Pretty well, in fact, either in Boot Camp or in a virtual machine. After I established that fact to my satisfaction, I went back to OS X on my Apple-branded hardware. I explain the two reasons why here.

For a detailed look at what I liked, disliked, and learned from those 21 PCs, see the accompanying image gallery .