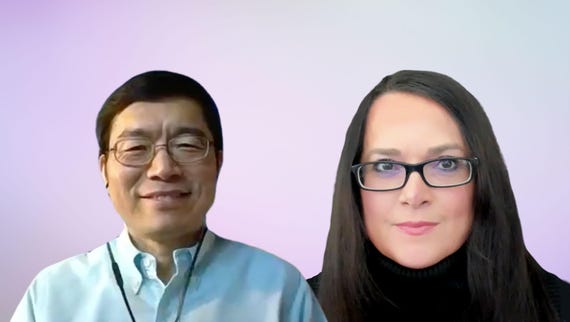 The images are made possible by 189 individual sensors spread over a two-foot wide focal plane that dwarfs a standard camera's 1.4-inch-wide imaging sensor. Each of the sensors can take 16 megapixel images.

The telescope-camera, once complete, is destined for the Rubin Observatory in Chile, where it will periodically take panoramic images of the complete southern sky for a decade. Its data will feed into the Rubin Observatory Legacy Survey of Space and Time (LSST) – a catalog containing more galaxies than there are living people on Earth.

The research team has released images taken with the focal plane of the LSST camera, as well as a camera image browser viewer. Current images include the head of a broccoli, the Flammarion engraving, and a collage of the camera team.

The images aren't as clear as those that will eventually be possible because they were taken without a lens. Instead, the SLAC team used a 150-micron sized pinhole to project images onto the focal plane.

The camera will be about the size of an SUV once complete, which is expected to happen by mid-2021.

The LSST camera team still need to integrate lenses, a shutter and a filter exchange system. It will include what's thought to be world's largest optical lens. The primary lens measures 1.57 meters (5.1 feet) in diameter, while a second has a diameter of 1.2 meters, and a third is 72 centimeters in diameter.

How much will it cost to assemble this giant LSST camera? A whopping $168 million, according to the telescope's designer, the US government's Lawrence Livermore National Laboratory.

"Nearing completion of the camera is very exciting, and we're proud of playing such a central role in building this key component of Rubin Observatory," said JoAnne Hewett, SLAC's chief research officer and associate lab director for fundamental physics.

"It's a milestone that brings us a big step closer to exploring fundamental questions about the universe in ways we haven't been able to before."

Like many others, the team's work was suspended until May due to the coronavirus pandemic.

The LSST camera's focal plane has a surface area large enough to capture a portion of the sky about the size of 40 full moons. Its resolution is so high, the team said, that you could use it to spot a golf ball from 15 miles away.

The camera is expected to collect images of about 20 billion galaxies over the coming decade and should help scientists understand how galaxies have evolved over time. It will also help scientist test models of dark matter and dark energy.

Join Discussion for: The world's largest digital camera has taken...