The X-factor in our driverless future: V2V and V2I

The technology behind how vehicles communicate with one another and their surrounding environment will be the linchpin for the success of autonomous vehicles.
Written by Conner Forrest, Staff Writer on Feb. 1, 2018 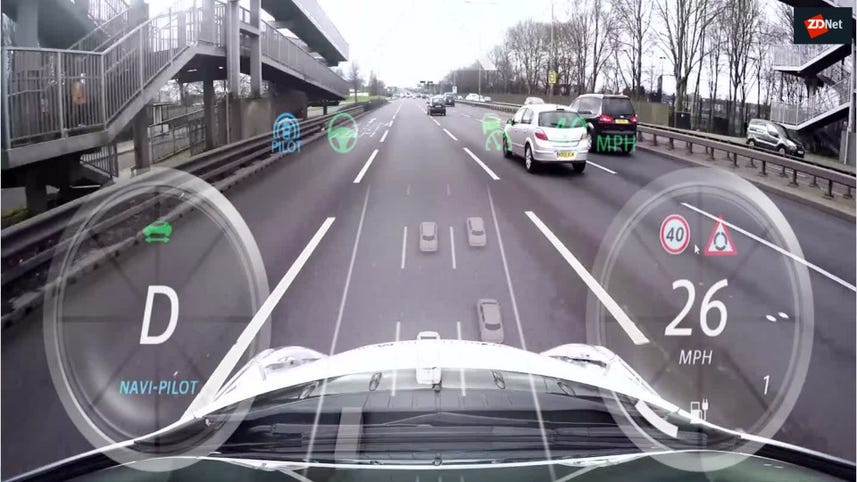 Multiple technologies go into making an autonomous car ready for the road. Cameras, sensors, LiDAR, GPS, and more all play a part in helping the vehicle to stay in its lane, stop for red lights, avoid pedestrians and more.

While these technologies are critical in helping the cars 'see' the world around them, they are only part of the puzzle. The foundational technologies in autonomous and driverless cars are those that allow the vehicles to communicate -- both with each other and with the environment they are driving in.

Using data collected from the aforementioned technologies (and sometimes even the technologies themselves), autonomous vehicles send messages to the world around them and take in other information that will be processed and applied to their decision-making efforts.

The growth of these communication tools is critical to the success of autonomous vehicles. Here's a quick breakdown of the ways driverless vehicles communicate with each other, and with the infrastructure they drive through.

Vehicle-to-vehicle (V2V) communication is exactly what it sounds like -- the technology that allows vehicles to share data about where they're going, their speed and acceleration, and their current location. According to the National Highway Traffic Safety Administration (NHTSA), V2V tech "allows vehicles to broadcast and receive omni-directional messages (up to 10 times per second), creating a 360-degree 'awareness' of other vehicles in proximity."

That awareness is key, as it can help the vehicle determine a potential threat that could lead to a crash. The car can then alert the driver to take appropriate action or, if it's fully autonomous, can take preventative measures itself. V2V systems have a range of 300 meters (984 feet), according to the NHTSA, and use a protocol called Dedicated Short Range Communications (DSRC), which is similar to wi-fi, to transmit data and operate in the 5.9GHz spectrum band, according to the FCC.

"This new technology doesn't just help drivers survive a crash -- it helps them avoid the crash altogether," the NHTSA wrote in its post.

It's important to note that V2V is a separate technology from driverless or autonomous systems, and many modern automobiles already have some form of V2V equipped. However, it's a technology that is critical in enabling driverless vehicles. The NHTSA proposed a rule in 2016 that would have required all new cars to have V2V equipped by 2023, but it appears to have been killed by the Trump administration in late 2017.

Many automakers are already building out their own V2V offerings. GM has implemented V2V in some Cadillac models, Toyota's Intelligent Transportation System (ITS) uses V2V in certain cars, and Audi, Mercedes, and more are adding the technology to their vehicles.

For the privacy-conscious, the NHTSA pointed out in a video that V2V technology doesn't track a vehicle, and will keep personal information anonymous.

Views on V2V are mixed in the tech community. Proponents hold up its ability to save lives and prevent crashes, but some have argued that the rapidly-approaching 5G protocols are more efficient, and would make V2V systems based on DSRC obsolete. Regardless of whether or not 5G modems take the place of DSRC, V2V communications will remain a critical factor in the driverless future.

One of the big challenges with V2V will be in the early stages of autonomous vehicle adoption, when driverless cars are sharing the road with traditional automobiles that they can't communicate with. The autonomous vehicles will still have radar, cameras, and LiDAR to rely on, but V2V technology makes for a much clearer picture of predicting vehicle behavior.

In the future, driverless vehicles must also communicate with the world around them. This is where vehicle-to-infrastructure (V2I) technology comes into play.

V2I communication involves the exchange of safety and operational data between individual vehicles and the transportation infrastructure that supports them, according to the US Department of Transportation (DOT). The goal is to improve traffic safety while also lowering inefficiencies.

"When cars, buses, trucks and emergency vehicles are able to 'talk' to traffic signals, stop signs, crosswalks and other features of the surface transportation system, drivers can be alerted and avoid crashes," according to a DOT fact sheet. "Traffic management centers can use the data to improve system performance and minimize environmental impacts."

In addition to stop signs and crosswalks, other connected components could include RFID readers embedded in overhead signs on overpasses, as well as connected cameras, lane markers, traffic lights, signs, and parking peters. As such, Internet of Things (IoT) technology will play a huge role in advancing V2I. Many of these infrastructure pieces will use the same DSRC technology deployed in V2V initiatives.

In the always-connected world, cyclists and pedestrians with smartphones will also play a role in the V2I communication network. The technology could help keep distracted pedestrians safer from potential traffic incidents as their phone, or other connected device, would be aware of potential vehicle behavior.

As noted by the DOT, V2I is a part of the concept of Intelligent Transportation Systems (ITS). Infrastructure will be able to communicate with vehicles and tell them how the roads are, how much traffic there is, if a road is closed due to construction, and where there is parking. All of this can help driverless vehicles better optimize their route for absolute efficiency.

To help users better understand the concept, the National Transportation Library released a V2I Message Lexicon explaining the concepts behind V2I messages and some of the standards developed for the technology. And in January 2017, the US Federal Highway Administration (FHWA) announced a guide to advance the development and deployment of V2I.

However, being that traffic infrastructure often involves complex partnerships between public officials and private industry, V2I could be slow to reach the kind of adoption needed to support a driverless future. Back in 2015, it was predicted by the General Accountability Office (GAO) that each V2I site could cost almost $52,000.

The technology is already in use in some cases: In 2016, Audi deployed a V2I network in Las Vegas, which allowed drivers to see on their dashboard how long they'd have to wait until a traffic light turned green. In 2015, BMW released a mobile app called EnLighten that performed a similar function. Major players in the autonomous driving space, such as Mobileye, have also released V2I integration products.

The rise of smart cities will also play a role in the further development of V2I systems. Auto companies like Mobileye, Ford, and others have been working on smart city infrastructure, which could leverage data collected by V2I communications to improve traffic flow, make cities more efficient, improve signage, and better understand the daily transportation flow of citizens.

Space
Tech jobs: These are the 10 most in-demand developer, cybersecurity and cloud roles