This self-driving car made an epic journey across the UK, but you won't be able to repeat it any time soon

The electric car drove 230 miles autonomously. The driverless vehicle industry is making progress, but it is nowhere near delivering on the UK government's promises.
Written by Daphne Leprince-Ringuet on Feb. 6, 2020 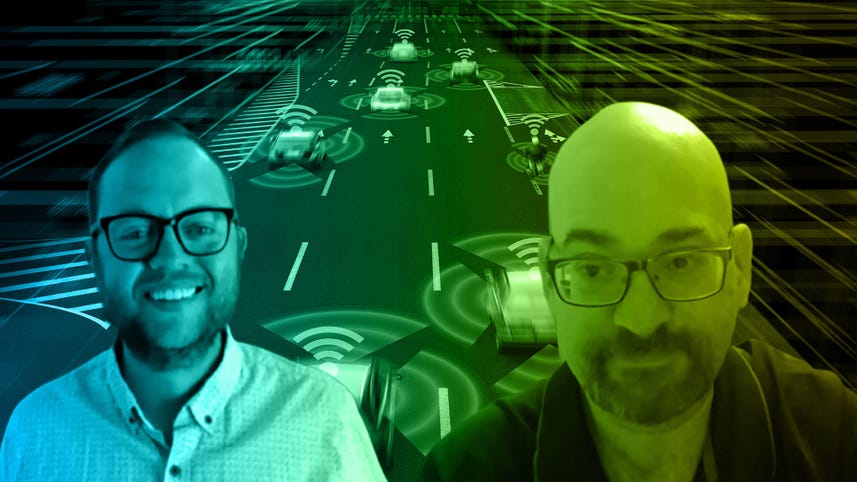 Last November, the car drove itself from Cranfield in Bedfordshire all the way to Sunderland, carrying on its board two trained engineers who monitored the vehicle's actions at all times – and sat ready to take control the car if necessary.

The car was spared no country lanes, high-speed roundabouts or junctions: the drive happened on the UK's public roads, with all of their infamous particularities. Changing lanes, merging, or stop-and-starting were all activated by the autonomous technology, with no driver input.

Bob Bateman, project manager for Nissan technical centre, said: "The HumanDrive project allowed us to develop an autonomous vehicle that can tackle challenges encountered on UK roads that are unique to this part of the world, such as high-speed country lanes with no road markings, white lines or kerbs."

The Japanese car manufacturer was not alone in its venture to conquer British roads. The project was funded by a consortium including the UK government's Centre for Connected and Autonomous Vehicles (CCAV), and benefited from an overall £13.5 million package.

The business minister Nadhim Zahawi was in fact quick to stress that the autonomous drive completed by Nissan's Leaf was "a huge step towards the rollout of driverless cars on UK streets".

The saying is becoming an all-too familiar one. The past few years have seen fast progress in autonomous vehicle technology, which more often than not have been hailed by the government as "milestones", "major steps", and other landmark developments towards making driverless cars a common sight in the country. However, driverless cars are a long way from being a reality.

But just how many milestones and major steps are needed before the objective laid out in the UK's industrial strategy – to have fully self-driving vehicles on the roads by 2021 – is actually achieved?

Of course, the latest news from the HumanDrive project is encouraging. But a quick look beyond UK borders puts the results into perspective: in the US, software company Embark has already driven an autonomous truck on a 2,400-mile journey from Los Angeles to El Paso, Florida. That was two years ago.

As of 2019, Embark even has a competitor; Silicon Valley start-up Plus.ai said last year that it had completed the first commercial coast-to-coast journey, a 2,800-mile drive, with an autonomous lorry.

That's not to mention the most notorious contender in the competition for autonomous driving technology, Google's Waymo, which has driven ten million miles on public roads just in the past year. Waymo is also already testing rides in Phoenix, Arizona, with passengers on board and no driver behind the wheel – not even a safety engineer, just in case.

And on the other side of the globe? The Japanese government is working with Toyota and Nissan to allow dozens of self-driving cars to carry tourists around the streets of Tokyo ahead of the Olympics next summer.

The US government last year put forward $60 million (£46 million) in grants to support eight projects designed to deploy driverless cars on the nation's roads; in comparison, the UK's CCAV has a £25 million ($32 million) budget to fund four pilot schemes. Money is arguably a reason that the technology is developing faster abroad, therefore; but the discrepancy isn't such that it explains all.

SEE: The top 3 companies in autonomous vehicles and self-driving cars

Kim Blackburn, research fellow at Cranfield University, who participated in the Human Drive project, told ZDNet: "Funding is one thing, but ultimately, you need to drive a certain number of miles before the technology can be ready, and depending on where you are, it can be easier to drive those miles. In the US, they don't have any roundabouts, the streets are straight and it doesn't rain as much."

"But the UK is certainly contributing in its own way, too. Autonomous technology is a global challenge: the research that Google and others are doing is informing our research, and equally what we just did with Nissan will go into other things."

It's not all doom and gloom; although slowly, the UK is making progress towards deploying its own fleets of driverless cars. The government recently announced that it is working to amend the code of practice for automated vehicle testing, to let car manufacturers conduct "advanced trials" in which there is no human safety driver on board.

"The technology is there," said Blackburn. "Now it's about how we bring it to the market. We need to bring the products out to bridge the gap between now and the future."

One of the main barriers to the mainstream adoption of driverless cars is still trust. With horror stories, such as Uber's self-driving test cars running over pedestrians in city centres, making headlines in the past years, it is easy to see why customers would be reluctant to take up the technology.

"We are trying to develop vehicles that people want to use," said Blackburn. "What makes people trust a car? Is it about how it turns, how it performs this or that manoeuvre? As engineers, this is the target we are working towards now."

In that respect, the HumanDrive project did not get its name out of an attempt at sarcasm. Blackburn explained that the experiment was also meant to refine the technology to make the vehicle drive in as human a way as possible – "for people to actually trust and use the car in the future."

For example, the vehicle was tested on private tracks where data was taken from human users to understand how drivers interact with the road, how they anticipate a narrow turn or pass a cyclist, or even slow down in difficult weather conditions.

The data was then pumped into the autonomous technology's algorithms, in an attempt to create a "human-like" form of driving.

It is unclear whether, and when, future users will be won over. Blackburn, along with the consortium behind HumanDrive, is optimistic; but in the UK, it is increasingly looking like the government is going to have to rethink the 2021 deadline.