The top 3 companies in autonomous vehicles and self-driving cars

As autonomous driving continues down the road to reality, these companies are fueling the movement.
Written by Macy Bayern, Multiplatform Reporter on Nov. 4, 2019 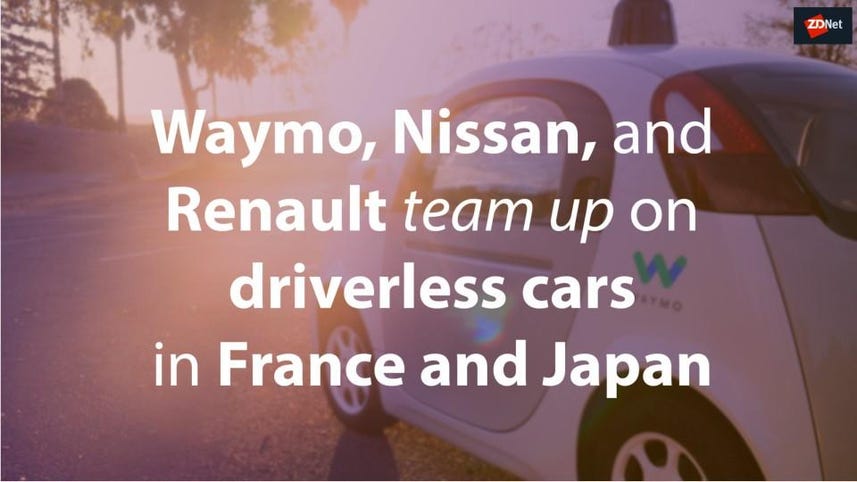 Imagine: After a long flight home from a conference, you walk outside to the airport's ground transportation and are met by an airport shuttle, which takes you directly to your car. Here's the plot twist: The shuttle is operating without a human driver. This hypothetical scenario will most likely become reality within the next five years, said Bryant Walker Smith, a University of South Carolina law professor who studies autonomous vehicles.

"At the societal level, self-driving cars have the potential to save millions of lives, reshape our cities, reduce emissions, give back billions of hours of time and restore freedom of movement," said Mo ElShenawy, vice president of engineering at GM Cruise. "At the individual level, we believe self-driving cars will deliver safer, more convenient, more affordable, and more accessible transportation."

Autonomous, or self-driving, vehicles have been talked about for years, if not decades, according to Smith. "The reality of automated driving is that, from the 1930s onward, it was always 20 years away: In the '30s they would appear by '50s, and the '50s by the '70s and the '90s to today. But in early 2010, it shifted to being about five years away consistently, and even today it's still about five years away," he said.

This timeline shift is largely due to the rise of machine learning and Internet of Things (IoT) technology, particularly sensors. IoT sensors equip driverless vehicles with real-time data, which helps the automobiles understand their changing surroundings, read traffic conditions, and detect operational issues.

However, IoT and machine learning technology has its limitations in the autonomous vehicle realm.

"The technology is not done. It's not ready for commercial applications," Twork said. The technology simply does not yet exist to support completely autonomous vehicles, which can navigate highways, congested metroplexes, or harsh driving conditions.

Michael Ramsey, senior research director of automotive and smart mobility at Gartner, said that in the next few years, we are realistically "more likely to see shuttles and semi-public transportation in the form of slow-moving, granny-like vehicles that are operating in cities and dense urban areas. It may be that they operate in protected or semi-fixed routes for some time to come."

Along with technological limitations, safety is another major barrier to both development and public adoption.

While fully autonomous vehicles still have a long road ahead of them, some companies are using available technology to make waves in the industry.

There are numerous autonomous vehicle organizations, but some stand out more than others. Based on empirical data and public statements made by various companies, a semi-consensus exists in the autonomous driving community as to which companies are the most advanced, said Gartner's Ramsey. These include Waymo, GM Cruise, and Argo AI.

"Google and their Waymo spinoff is by far the most recognized leader in the area. They've been doing it longer than anyone else. Their fleet is significantly larger than any other company's," Ramsey said. "They very recently announced to consumers on their platform in Arizona that they're going to start launching actual autonomous rides, which is a significant step forward. I don't think anyone else is that close to being able to physically take the engineer out."

Waymo used Phoenix, Arizona, as the site for testing Waymo One, a self-driving taxi service. These tests all had a human backup driver in their vehicles as a safety precaution, but a recent email was sent out to Waymo users claiming that completely autonomous rides were on the horizon.

Fully autonomous rides have been tested, but it's unclear whether these rides will become mainstream. Regardless, the prospect is the most advanced gesture yet from an autonomous vehicle company.

According to Waymo, "the self-driving sensor suite consists of LiDAR, cameras, and radar, as well as microphones to detect sounds such as sirens. Like a person's own five senses, Waymo's self-driving technology is more powerful as a whole than the sum of its parts; each sensor complements the others."

Waymo began developing its own hardware and sensors in-house in 2011 when it found nothing else on the market provided the functionality that would enable level-four vehicles and fully driverless cars, the company said.

A level four vehicle refers to a simple driverless vehicle, similar to the earlier airport shuttle example, which can operate at slower speeds and within certain parameters, said Smith. There are five autonomous driving levels, which help discern how autonomous a certain vehicle is, ranging from a driver-assistance level one, to a fully autonomous level five.

"Waymo is pretty unambiguously the leader," Smith noted, as the company has come closest to producing a level five automobile than any other company.

"GM Cruise is in a pretty good position," Smith said. A General Motors subsidiary, Cruise is also a big name in the autonomous vehicle game.

Perhaps a little too ambitious, recently pushing back the launch date for its driverless taxi service from late 2019 to early 2020, ZDNet reported. The self-driving cars the company has produced, however, are advanced.

"Each of our self-driving cars has been built from the ground-up," ElShenawy said. The Chevy Bolts may look like a regular retail model on the outside, but under the hood, 40% of its parts have been altered to facilitate autonomous driving, he said.

"Unlike other autonomous vehicle companies, being deeply integrated with one of the world's largest automakers like General Motors positions Cruise to manufacture self-driving cars on an assembly line in Orion, Michigan, which is capable of producing hundreds of thousands of vehicles per year," ElShenawy continued.

The Cruise vehicles use machine learning techniques, cloud-based tools, and IoT sensors to gather data about their surroundings and make intelligent decisions based on that insight.

A newer creation, Argo AI has a "very significant footprint and growing footprint in the United States with the number of cities that they are testing in, and also, with the recent partnership with Volkswagen, I think they have the potential to kind of take a leadership position," Ramsey said.

Argo AI is an independent company that started in 2017, with a $1 billion investment from Ford Motor Company, Twork explained. Volkswagen only recently joined the partnership, which is still undergoing regulatory review, investing another $2.6 billion, he added.

Argo AI specializes in a different platform than its competitors in that it isn't striving to develop a car or operate a service. Rather, the company's goal is to develop the self-driving system.

"The vehicles that are being used are Ford Fusions, but that's not necessarily the intent of what the final product will be -- it's obviously up to Ford to decide which vehicles they want to use," Twork noted. "What's unique about Argo is that we're developing the self-driving system. We are not developing a car, we're not going to be the operators of the services. That's something that our partners will be doing on their own or in conjunction with other partners potentially."

The benefit of close partnerships with car manufacturers is that Argo AI is able to focus on the technology, developing it at a much deeper level, Twork said.

The outside of Argo AI-equipped vehicles have a combination of sensors -- LiDARs, radars, and cameras. The LiDAR is used to locate the distance of objects, and cameras help with depth perception, Twork explained.

Two people are in all of Argo AI's vehicles at all times, in case the vehicle needs intervention from a driver, Twork added. The second person is there to help take notes on the car's functionality and behavior, locating areas in which the software can be improved.

"In a very short period of time, we've been able to basically put the system at a level of maturity far beyond what other companies of our age have been able to do," he claimed.

For more, check out How will autonomous vehicles affect your industry? on ZDNet.