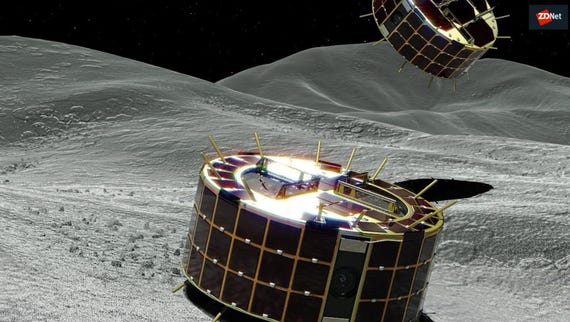 JAXA, the Japanese space agency, has successfully landed two mobile exploration robots on an asteroid hurtling through space 200 million miles from earth. The rovers, collectively known as MINERVA-II, were launched from the spacecraft Hayabusa2 on Friday.

It marks the first time mobile robots have successfully landed on an asteroid, and it's a major milestone for Hayabusa2, an unmanned exploration mission launched in December 2014. Hayabusa2 arrived at the near-earth asteroid Ryugu in late June for what will be a year-and-a-half survey.

Also: How NASA chooses tech for the ISS, and why AI could help get us to Mars

A previous Hayabusa mission was considered only partially successful due to technical glitches that hampered collection efforts. Some asteroid dust was collected by the mission, however.

The MINERVA-II minibots first separated from the Hayabusa2 spacecraft on Friday. There were some tense moments when the communication link with the bots was lost shortly after separation.

"Communication with MINERVA-II1 has currently stopped. This is probably due to the rotation to Ryugu, and MINERVA-II1 is now on the far side of the asteroid. We are currently working to confirm if there are images capturing the MINERVA-II1 landing," the Hayabusa2 team said via Twitter.

The link eventually was reestablished and the robots appear to be operating normally.

"The two rovers are in good condition and are transmitting images and data," according to a JAXA statement.

Takashi Kubota, a spokesperson for the Hayabusa 2 mission, conveyed the elation of the team. "The good news made me so happy. The image taken by MINERVA-II during a hop allowed me to relax as a dream of many years came true. I felt awed by what we had achieved in Japan. This is just a real charm of deep space exploration."

Robots are increasingly useful in space exploration. NASA has been preparing a mission that relies on robots to mine resources from the moon, for example. The space agency currently uses an array of robots to supplement or stand in for human crews.

Next month, the Hayabusa2 orbiter will deploy a larger rover called the Mobile Asteroid Surface Scout (MASCOT). A second hopping robot will be deployed next year.