In 2006 and 2007, there was an enormous documents standards war between Microsoft, with its OpenXML documents format, and the open-source community with its Open Document Format (ODF).

In the end, Microsoft, while  eventually supporting ODF , won. ODF, while still supported by such popular open-source office suites as LibreOffice and OpenOffice, became something of an after-thought. 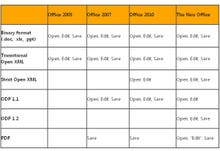 Until, the UK government announced on Tuesday, that it will now require all official office suites to support ODF.

The document format world has just been turned upside down.

The UK Minister for the Cabinet Office Francis Maude, said in prepared remarks the, "Government will begin using open formats that will ensure that citizens and people working in government can use the applications that best meet their needs when they are viewing or working on documents together."

Specifically the selected standards are:

The UK made this decision, Maude said, because: "Our long-term plan for a stronger economy is all about helping UK businesses grow. We have listened to those who told us that open standards will reduce their costs and make it easier to work with government. This is a major step forward for our digital-by-default agenda which is helping save citizens, businesses and taxpayers £1.2 billion ($2.05bn) over this Parliament."

Andrew Updegrove, a world-recognized standards expert and founding partner of the law firm Gesmer Updegrove, said on his standards blog, ConsortiumInfo, about the decision:

"The U.K. Cabinet Office accomplished today what the Commonwealth of Massachusetts set out (unsuccessfully) to achieve ten years ago: it formally required compliance with the ODF by software to be purchased in the future across all government bodies. Compliance with any of the existing versions of OOXML, the competing document format championed by Microsoft, is neither required nor relevant."

In an e-mail interview, Updegrove told ZDNet that it's been a "very long and difficult road" for anyone watching the saga.

"But in the end, the sound reasons for insisting on truly open, independent standards created with the user and not the vendor in mind has begun to prevail," he said.

Italo Vignoli, one of the founders of The Document Foundation, the organization behind LibreOffice, said in an interview at OSCon in Portland, Oregon, that while it's, "too early to understand the full ramifications on the office suite eco-system, but it's like coming out of a dream to find what you've been hoping for years has finally come true."

Vignoli continued: "As soon as I get back to Italy, I will tell the Italian government that this is a milestone in the freedom of documents and protecting people from organizations trying to lock them into any kind of format. The UK decision will give users the freedom to use either Microsoft Office or open-source programs such as LibreOffice."