The readings might be more accurate, too, considering how our blood pressure tends to rise in the doctor's office.
Written by Charlie Osborne, Contributing Writer on Sept. 21, 2018 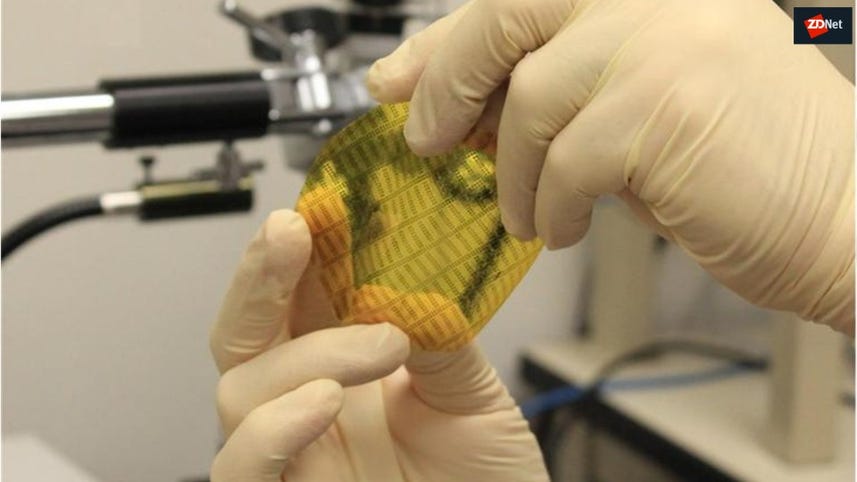 A small, stretchy patch could one day be used to monitor the blood pressure deep inside our body without the need for invasive methods.

A team of academics led by the University of California San Diego said the ultrasound patch, which is no larger than your average plaster, could hold incalculable value to medical professionals that need a way to constantly monitor blood pressure changes in patients with serious illnesses.

In a paper published September 11 in the academic journal Nature Biomedical Engineering, the researchers say the non-invasive method is able to monitor blood pressure from arteries placed at strategic points on a human body.

The patch is made from a thin sheet of silicone elastomer. A small lattice of electronic "islands" connect to each other, each of which contains electrodes and tiny devices called piezoelectric transducers which produce ultrasound waves as electricity passes through them.

These electronics are connected through a web of copper wires which are able to bend and stretch in order to conform to the texture and curves of human skin.

The ultrasound waves are able to penetrate the body and record blood pressure readings as deeply as four centimeters below the outer layer of the skin. As blood vessels pulse, the movement of blood is recorded and converted into waveforms.

"Each peak, valley, and notch in the waveform, as well as the overall shape of the waveform, represents a specific activity or event in the heart," the academics say. "These signals provide a lot of detailed information to doctors assessing a patient's cardiovascular health."

During tests on a male subject, the individual was asked to wear the patch on the forearm, wrist, neck, and foot during exercise and whilst stationary.

A variety of tests revealed the patch was able to perform as well as some of the current clinical methods used to measure blood pressure.

The academic team believes that in the future, the patch could be used to detect cardiovascular problems early on with greater accuracy, and may also be able to provide clinicians with real-time data on the blood pressure of patients with heart or lung disease.

The technology could also be adapted to measure other vital signs from inside our bodies which indicate other diseases and illnesses.

However, a number of challenges lay ahead. The team has yet to integrate a reliable power source and the researchers must also decide on a way to process the data gathered by the sensors, as well as a reliable method to transmit this information wirelessly.

See also: Sensors under the skin monitor your alcohol intake

"Wearable devices have so far been limited to sensing signals either on the surface of the skin or right beneath it," said Sheng Xu, a professor of nanoengineering at the UC San Diego Jacobs School of Engineering and corresponding author of the study. "But this is like seeing just the tip of the iceberg."

"By integrating ultrasound technology into wearables, we can start to capture a whole lot of other signals, biological events and activities going on way below the surface in a non-invasive manner," Xu added.