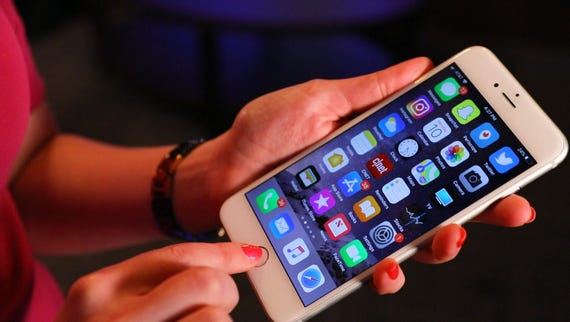 Techie work environments are always "show and tell" places for geeks to unveil their newly acquired toys, like the latest and greatest smartphones and tablets.

Like exotic birds showing off the wild colors of their plumage or large mammals displaying the size of their tusks in order to impress the females of their species, there seems to be an equivalent yearly ritual when the techies proudly display their new smartphones to their friends and co-workers, in order to establish their geek creds.

Also: We broke $9,000 worth of phones to find the toughest iPhone case (CNET)

Because you can't be caught dead with last year's model, or God forbid, the generation previous. Oh no.

Since the introduction of the two latest smartphone heavyweights -- such as with the new iPhone XS and XR this month and the Samsung Galaxy Note 9 earlier this summer -- it seems like the "Hey! Look what I got" syndrome has swung into overdrive.

I've seen guys doing the "show and tell" thing for about 10 years now. Not a day went by with a co-worker walking over to my desk to show me what they bought. On any given day during peak device release periods, it probably happened three or four times with completely separate people.

I remember one time this happened, in 2012, when the iPhone 5 was released, and I initially became an Apple iPhone customer myself.

Also: What to expect: Pixel 3 and other phones coming

The guy who sat next to me at my then-consulting gig in New York City, another consultant, who I'm going to name Nick, finally got his iPhone 5 after patiently waiting on line for hours. People used to do that then, amazingly.

With all my co-workers that brought in their new toys, this had been my latest standard response. Because if you didn't want to hold it or touch it, it was like a sign of disrespect.

It would be like refusing to look at a picture of someone's newborn child.

"Sure, man, just be careful with it," Nick says. He hands over his white iPhone 5 and places it on my desk. I pick it up and hold it, nervously.

Now, I know we have very sophisticated devices today, but in 2012, the iPhone 5 was a really nice phone. Even an Android fan and life-committed Apple-hater like myself had been convinced to buy one. And it was still sitting at home in Florida.

Unlike Nick, I hadn't even opened the box yet. Why not? I'll get to that in a minute.

"Geez man, this thing is really light," I said to Nick. I power on the screen and notice the speed of the user interface and the bright colors. I then carefully hand the thing back to him.

The iPhone 5 was thin. Like crazy thin. And it was made of aluminum. Naked, it was -- and still is -- industrial design genius. It was like something out of freakin' Star Trek. Hell, it was more impressive than the stuff they have on Star Trek.

"So, ah, Nick, have you decided what kind of case you're gonna put on it?" I asked, sheepishly.

"Well, I dunno, if I put a case on it, it sort of defeats the purpose of how nice the phone looks and how thin it is, doesn't it?"

"Well, did you buy the phone for looks or for what it actually does?"

"I got it because the contract was up on my old iPhone. Verizon was out of accessories when I stood in line for three hours to buy the thing, too."

"Yeah, three, two of them little, but what does that have to do..."

"Do you have any idea of what happens when you drop one of those phones from four feet or higher onto solid concrete or a hardwood or tile floor?"

"Well, basically, on any of these new expensive smartphones, you got two areas you need to be concerned about. The first and foremost is the screen itself.

Now, smartphone vendors along with companies like Corning have improved the tensile strength of the glass since previous generations, but if it lands face down and hits any kind of protrusion, you've got a really good chance of cracking the screen.

The actual casing on your iPhone is made out of anodized aluminum, so while it will do better with scratches than a glass sandwich, you can still dent it and possibly chip a piece off and damage the electronics, and the forces of the impact will probably shatter the screen, too."

"That doesn't sound very good. But I got the carrier insurance."

"That's only good for an actual device malfunction," I said. "If you bring that iPhone into your carrier, the phone is essentially shot and the repair fee might be outrageous and the damage coverage is totally at their discretion depending on what they define as 'accidental.'"

You need to look at Verizon's fine print. You can buy AppleCare+ during the time of purchase, but it costs extra and covers a limited number of incidents on your iPhone over a period of two years, each incurring a service fee at an Apple retail store. If you want to buy AppleCare+ after the fact, it has to be within 30 days of purchase and you need to bring the device into an Apple retail store for inspection."

If the device is found to be unrepairable and Apple or your carrier decides not to cover you, you'll have to do an in-contract unsubsidized, full retail purchase to replace it."

"So, Jason, do you use a protective case on your phone?"

"Oh, hell yeah." I showed him my old Android phone, which was housed in an armored case.

"I ordered an iPhone 5 myself a few weeks ago, it's still sitting in a box at home unopened, and I'm going to put it in an OtterBox Defender as soon as it arrives."

"I've seen those kinds of cases on other phones. They're really big and make the phone a lot thicker and really ugly."

"They do make it thicker, and it adds weight. I currently use one on my tablet, and my wife uses one on her phone. But they are incredibly protective."

"Well, the entire iPhone is encased in a thick, shock-resistant polycarbonate plastic clamshell, that elevates the corners of the phone above the screen which will protect it from shattering if it goes face down. It also has a built-in screen scratch protector. Then the whole thing is wrapped in a silicone rubber suit so that if the sucker hits the ground, it's gonna bounce. It's like Batman's cell phone case. Comes in a whole selection of colors now."

"What does it cost?"

"Fifty bucks, for the most protective model. They have three other models that expose more of the phone's aesthetics, but, of course, are less protective. So, you might as well as get the best one."

"Yeah, You've got a point. What did you say that company was called again?"

Have you sacrificed the "beauty" of your smartphone in exchange for protection and additional peace of mind? Talk Back and Let Me Know.

Join Discussion for: iPhone XS smartphone beauty really is only...