In my previous post I discussed how historically railways were the supply chain backbone of the US economy (as was the case with many other nations) 120 years ago.Globally the internet is remarkably similar today: although we tend to think of it as a "network of networks" consisting of millions of private, public, business, government and academic networks, once you go global the fundamental plumbing pipes are surprisingly fat and few.
Written by Oliver Marks, Contributor on Dec. 30, 2008 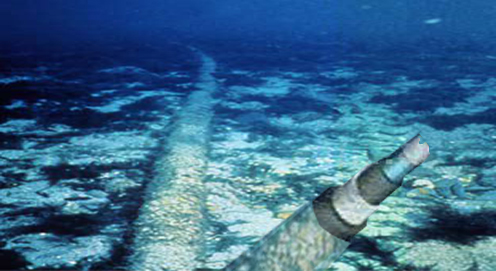 In my previous post I discussed how historically railways were the supply chain backbone of the US economy (as was the case with many other nations) 120 years ago.

Globally the internet is remarkably similar today: although we tend to think of it as a "network of networks" consisting of millions of private, public, business, government and academic networks, once you go global the fundamental plumbing pipes are surprisingly fat and few.

The UK Guardian newspaper has a great diagram of 'the internet's undersea world' online.

This technology is a continuation of the telephony era - the first transatlantic telephone line, featuring a whopping 36 lines, was only inaugurated in late 1956. During the First World War both British and German forces systematically attempted to destroy the others' worldwide communication systems by cutting cables with submarines and surface ships.

Since the '50's there's been a huge increase in the amount of telephony cabling and now fiber optics, which also carries net traffic.

We have recently had some major outages, some of which are mysterious and some remarkably low tech: in 2007 for example 11 kilometers of the TVH section of the SEA-ME-WE 3 cable went missing from the floor of Ca Mau Sea: it turned out it had been stolen for scrap! This greatly reducing internet speed in Vietnam for months and also affected Hong Kong and Thailand's internet access until it was replaced.

According to Global Marine Systems, one of the major cable maintenance companies, "Undersea cable damage is hardly rare...more than 50 repair operations were mounted in the Atlantic alone last year". (A cut in a single cable crossing the Atlantic has "no significant effect" due to the many alternate routes, whereas, for example, the Middle East as a destination only has a handful of Internet cables connecting it to the rest of the world, so the effects of any damage are more immediately felt).

All very murky just like the undersea world - what's interesting is the impact this latter day internet railroad style backbone has on the brave new world of cloud computing.

Impact on the Cloud

In the west we have many ways the internet can still reach us if one or more routes to our location are down. In the case of the major outage of December still under repair on the FLAG Telecom, SEA-ME-WE 4, and SEA-ME-WE 3 cables, India and Egypt are still struggling with massively reduced connectivity and lousy latency.

Global businesses take international collaboration and communication for granted these days, but as global connectivity expands there are many issues at the outer extremities of the network.

The Asia internet traffic report for example is a significant guide in that part of the world - much like keeping your eye on the driving commute status in LA, it can define productivity.

The reality is that putting data in the cloud isn't just a vendor viability issue - there is also this fundamental plumbing reliability concern to think about when connecting federated or distributed partners and business units.

With many people now very dependent on the internet for their livelihood it is growing increasingly important that the fundamental infrastructure of the net - which is strategically important on a lot of levels - is more closely monitored and guarded. Depriving entire nations of internet access can be as crude as snipping cables, as was the case with telephone cabling in World War 1.

Add to this potential physical problem denial of service attacks and viruses, and on premise computing (having your information in house on your own servers behind a firewall) looks much more attractive, secure and manageable.

The economic appeal of cloud computing costing is extremely attractive in these very tight times; identifying how to most effectively use it is mission critical to ensure up time and acceptable performance. Where your data lives is an increasingly important issue, not least because of latency issues, but also thinking about what basic internet availability is critical between business units.

The business strategic planning challenge is therefore essentially defining what information is fundamental to keeping your business running in real time, and what can be cloud based. These decisions are foundational to the success of your collaboration environments.