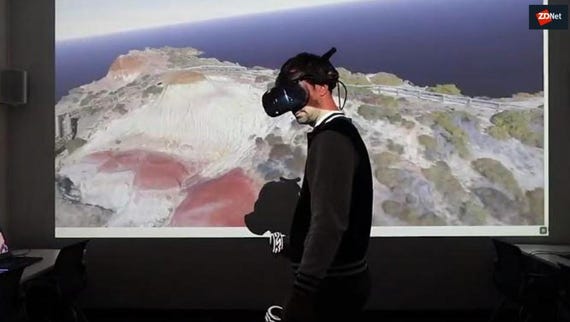 South Australia's Hallett Cove Conservation Park is a geological and archaeological heritage site that is home to more than 17,000 Aboriginal artefacts, including some that date back to the ice age some 280 million years ago.

While the national park frequently attracts visitors, the Project Live team at the University of South Australia (UniSA) has partnered with Framework VR and the Australian Institute of Mining and Metallurgy (AusIMM) to use virtual reality (VR) to reveal the fossilised landscape through a 3D gamified experience called Beyond the Ice.

For those without a VR headset, the experience is accessible online through web "geo-tours" using 360-degree images, interactive 3D outcrop models, and deep zoom images.

"Unlike many VR experiences, this is a lot more than some pretty pictures and 3D models thrown together that don't really offer much as a learning exercise. It was designed as an interactive, gamified experience that engages people in science by challenging them to unlock the geological secrets of Hallett Cove," project leader, geologist, and UniSA associate professor Tom Raimondo said.

See also: 5 strategies for navigating VR in the enterprise (TechRepublic)

The VR experience has also allowed users to be accompanied by a virtual robot guide, as well as take part in quizzes, collect 3D rocks, and hidden messages in the applications.

Beyond the educational aspect, Raimondo said Beyond the Ice could be used to supplement field work.

"Virtual reality experiences allow us to add an extra dimension to our usual field training, so that students can repeat, reflect on and extend their field skills across more locations than are logistically or financially feasible to visit first-hand. The world really is your oyster in VR," he said.

"Not only does virtual reality provide a flexible way to engage the next generation of science students, it also lets us adapt the program to suit different audiences, different skill levels and different field locations, so it's a really fantastic step forward in online and immersive learning."

A move that is touted to reduce risks and costs without jeopardising the ability to learn.

HTC believes VR is the next big tech opportunity for education

But VR will only truly flourish when 5G does, HTC said.

The Australian startup works with traditional owners to help them share cultural narratives, language, and storyteling through augmented and mixed reality.