Full Bio
Posted in Technically Incorrect on July 4, 2020 | Topic: Coronavirus: Business and technology in a pandemic 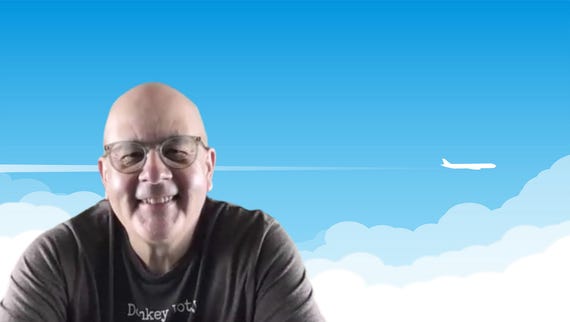 What does a tech executive now do when asked to fly for business?

Somehow, working from home had certain advantages of safety, yet there are currently signs that travel is slowly resuming. Some of it perhaps even for business.

German executives, for example, are again flying to China. Moreover, United Airlines announced that it's adding 25,000 flights to its August schedule and resuming its flights between San Francisco and Shanghai on July 8.

This is a route on which, reports say, Apple routinely used to spend $150 million a year with United.

You might imagine, then, that United would ensure every possible precaution is being taken to ensure these flights are as well protected from COVID-19as possible.

You might imagine, too, that airlines will be doing all they can to ensure social distancing. You might also imagine, however, that they're interested in money.

Delta is blocking middle seats until the end of September.

Yet American Airlines just announced it's going to be filling every seat available -- something the airline has been known for over the years. And now something that's appalling director of the National Institute of Allergy and Infectious Diseases Dr. Anthony Fauci and CDC director Robert Redfield, who believe this jeopardizes human safety.

And then there's United.

It, too, doesn't seem so keen on blocking middle seats at all. Its explanation, though, may make one or two travelers blanche.

As Business Insider reported, the airline's chief communications officer, Josh Earnest, offered to a media briefing: "When it comes to blocking middle seats, that's a PR strategy. That's not a safety strategy."

Yes, airlines did, in a fit of glorious money-gouging, reduce the space between seats to something akin to the space between human teeth. However, to throw up one's hands and simply say "aw, tough" isn't too far removed from the problem that Texas and other states have had with people crowding in bars.

Moreover, enforcing mask-wearing, especially on longer flights, isn't going to be easy. Especially when many flight attendants may not wish to take on too great a role of policing.

Earnest, though, expained the airline isn't actively pro-coronavirus: "If you want to stay safe on the airplane, we need to wear a mask. We need to have good air filtration. The airplane needs to be thoroughly cleaned, and we need to make sure that every stage of your journey, where we can socially distance, that we're doing that. Those are all the steps that scientists have recommended that we take."

Might these be the same scientists who have just explained they really don't like the idea of middle seats being filled?

You might say that Earnest is accurate in describing the difficulties of keeping people six feet apart. You might agree that social distancing on planes is impossible.

Yet some pilots believe more can be done. The Allied Pilots Association, which represents American Airlines pilots, believes the government should buy the middle seats -- and some other seats too -- in order to create more distance between passengers.

The union's president, Capt. Eric Ferguson, suggested: "The government would purchase enough seats on each flight to eliminate the need for any passenger to sit next to a stranger." So the airlines get their money, while passengers feel safer.

You might mutter that most tech executives -- especially if they work for Apple -- will be flying business class, so why worry?

Yet I've seen plenty of tech types in the back of the plane with me and that could, one day soon, begin to happen again. I wonder how they might feel about being squeezed by United and similar airlines.

Please, I'm not a doctor, and I won't ever play one on TV, not even in a governmental press conference. Yet if I'm given the choice between an aircraft with empty middle seats and one that's stinkingly full, I'll always choose the former. It's not merely PR. It's that, in some strange vessel of the mind, I still believe it'll be marginally safer (and definitely more comfortable).

And right now, whether I have to fly to Austin or Shanghai, anything I can do to increase my margin of safety by the tiniest fraction, I'll do.

Join Discussion for: United Airlines made a painful statement...