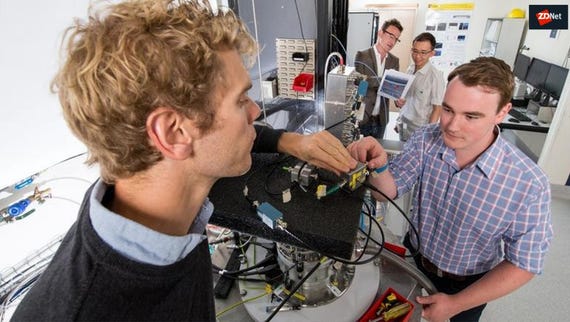 The University of New South Wales (UNSW) has announced the demonstration of a compact sensor for accessing information stored in the electrons of individual atoms, touted as a breakthrough that brings a scalable quantum computer in silicon one step closer.

UNSW is banking on silicon being the key to building the first quantum computer and the results of the research, conducted within the Professor Michelle Simmons-led Simmons group at the Centre of Excellence for Quantum Computation and Communication Technology (CQC2T), show how this may be achieved.

Quantum bits (qubits) made from electrons hosted on single atoms in semiconductors is a promising platform for large-scale quantum computers, the university believes, and creating qubits by precisely positioning and encapsulating individual phosphorus atoms within a silicon chip is the approach Simmons' teams are taking.

However, adding in all the connections and gates required for scale up of the phosphorus atom architecture was the challenge the researchers were faced with.

"To monitor even one qubit, you have to build multiple connections and gates around individual atoms, where there is not a lot of room," Simmons said. "What's more, you need high-quality qubits in close proximity so they can talk to each other -- which is only achievable if you've got as little gate infrastructure around them as possible."

According to UNSW, when comparing other approaches for making a quantum computer, Simmons' system has a relatively low gate density. However, the university explained that conventional measurement still requires at least four gates per qubit: One to control it and three to read it.

By integrating the read-out sensor into one of the control gates the team at UNSW has been able to drop this to just two gates: One for control and one for reading.

"Not only is our system more compact, but by integrating a superconducting circuit attached to the gate we now have the sensitivity to determine the quantum state of the qubit by measuring whether an electron moves between two neighbouring atoms," researcher and PhD student Prasanna Pakkiam explained.

"And we've shown that we can do this real-time with just one measurement -- single shot -- without the need to repeat the experiment and average the outcomes."

According to Simmons, the demonstration represents a major advancement in how information embedded in UNSW's qubits is read, noting also the result confirms that single-gate reading of qubits is now reaching the sensitivity needed to perform the necessary quantum error correction for a scalable quantum computer.

UNSW last month announced researchers had demonstrated an integrated silicon qubit platform that combines both single-spin addressability, which the university explained is the ability to write information on a single spin qubit without disturbing its neighbours, and a qubit "read-out" process, which is expected to be vital for quantum error correction.

Join Discussion for: ​UNSW has found a way to access information...