Robots that don't need to rest to recharge can work longer than their human competition, but that's only part of the reason wireless power will be game-changing in robotics
Written by Greg Nichols, Contributor on April 10, 2018 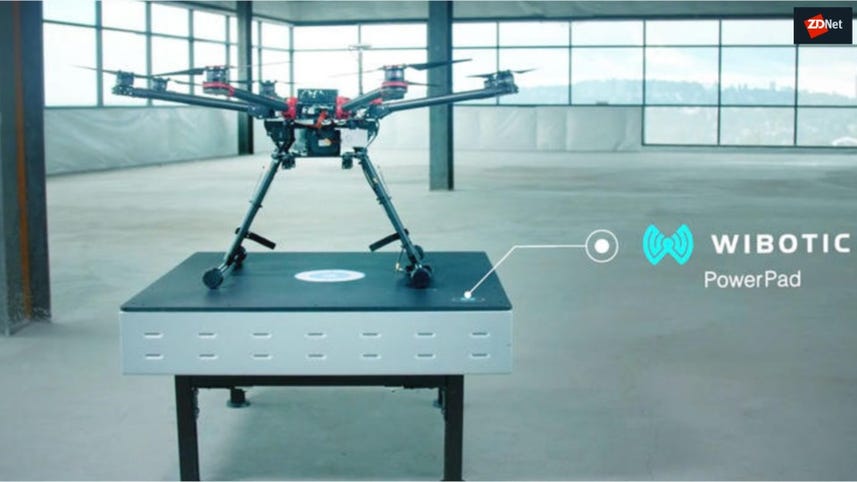 A new device allows robots used in warehouses and third-party logistics (3PL) facilities to draw power or recharge batteries wirelessly while in operation.

The technology could have a big impact on the capabilities of mobile industrial robots, potentially freeing them from limitations imposed by modern batteries.

Waypoint Robotics, which makes custom mobile robots for the supply chain industry, unveiled its EnZone Wireless Charging Dock at this year's MODEX, the largest supply chain expo in North & South America and the hottest ticket in town this week for the mobile robotics industry.

Last year, WiBotic made a splash with a wireless charging pad it claims can keep drones in the air indefinitely. That capability could prove indispensable if drone delivery takes off the way many analysts believe it will.

WiBotic has been at the forefront of bringing wireless inductive charging to robotics.

"By coiling the wire, and changing the number of coils between the primary and secondary wire, electrical energy of one voltage can be converted into another voltage. This is the principle behind electrical transformers -- and is essentially the same concept behind wireless inductive charging."

Transmission range is a function of the size of the coils, meaning it can be flexibly adapted to suit various applications.

The mobile robotics industry is growing rapidly, and Waypoint is smart to bring WiBotic's technology to what's become one of the most competitive sectors in robotics.

Increasingly, the robots are able to perform additional functions, as well, such as inventory analysis and operations optimization.

But battery life is a major constraint for untethered robots that need to zip around a warehouse floor. The next step for mobile robotics is the addition of picking and placing arms on those platforms, which would increase their capability dramatically.

Power draw, however, has been a stumbling block. Customers may not be willing to invest in a robot that needs to dock frequently, even if it can perform additional picking and placing jobs currently performed by humans or tethered robots.

Power storage is expensive and has tradeoffs when it comes to the form factor and the operating weight of a robot.

Waypoint's wireless option points toward a promising solution, allowing robots to draw power on the go and around the clock.

That could usher in a new generation of mobile robots with pick and place arms, an important step toward the much-hyped "lights out" warehouse with no human workers.