The US government spent most of its annual IT budget last year on maintaining systems that, in some cases, are decades-old -- largely because of an "if it ain't broke" mentality.

But the problem is that some of the tech is broken, vulnerable, and out of date -- and it's starting to reach a breaking point.

A report from the Government Accountability Office (GAO) shed light on how big the problem is. In a report published Wednesday, the federal government spent $80 billion on IT systems in 2015, but $61 billion was spent on operations and maintenance. The rest was on development and enhancement, such as purchasing new systems or expanding existing ones. 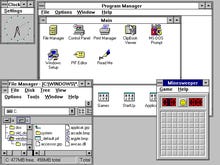 A 23-year-old Windows 3.1 system failure crashed Paris airport Some of the most important networks and systems today are woefully outdated.

Here's how bad it is:

A system used by the Justice Dept. to monitor security and custody levels and inmate population information still uses COBOL, a programming language that dates back to the post-World War era. A system that tracks incidents involving hazardous materials used by the Transport Dept. is more than four decades old. A number of servers at Homeland Security still run Windows Server 2003, which hasn't been supported for almost a year, but these servers won't be transitioned to federal systems until 2018 because of backwards-compatibility issues.

And, a nuclear weapons coordination system used by the Defense Dept. is still running on an IBM Series/1 computer -- a machine that dates back to the 1970s and uses 8-inch floppy disks.

On the bright side, the Defense Dept. told the oversight watchdog that it has plans to update some of its nuclear systems by the end of 2017.

Rep. Jason Chaffetz (R-UT, 3rd), the chairman of the House Government and Oversight Committee, said in a hearing shortly after the report's release that the government's IT spending "largely doesn't work."

The situation is so bad that Chaffetz said some government agencies are still running Windows 3.1, an operating system that dates back more than two decades.

Commerce, Defense, Treasury, Health and Human Services, and Veterans Affairs were named in the report as using the outdated Microsoft software.

The agency officials summoned to the committee argued that some of the older systems still work -- and any upgrades have been pushed to the bottom of the pile in favor of other IT spending.

Whith those older systems, the report argued that many government agencies are vulnerable to security vulnerabilities and flaws because the vendors no longer provide support for old software and systems.

For the upcoming 2017 fiscal year, the Obama administration asked for an 11 percent increase to $89 billion for the administration's annual IT budget.

Join Discussion for: US government is spending billions on old...