Mark Samuels is a business journalist specialising in IT leadership issues. Formerly editor at CIO Connect and features editor of Computing, he has written for various organisations, including the Economist Intelligence Unit, The Guardian, The Times, The Sunday Times and Times Higher Education.

Long gone are the days when Macs were the specialist preserve of designers, startups, and students: Apple's hardware has moved from the coffee shop to the office and into the boardroom, with workers increasingly lured by the usability and design of Apple's devices.

However, in the enterprise Microsoft still remains dominant. So how easy is it to introduce and manage Apple devices in what is traditionally a Windows-oriented enterprise environment? Four enterprise tech chiefs give their different views on Apple in the enterprise.

1. Understand that Apple is likely to form part of your ecosystem

Mark Foulsham, chief digital officer at Scope, believes Apple is very much ready for the enterprise. The charity is working with the technology giant to investigate how new platforms and services might be used, including Apple Pay. Foulsham says his experience of working with the firm has been very positive.

"They're moving at a good pace and they're listening to us in terms of our feedback," he says. "There's a long way to go still. But I think what you will find is that most organisations are going to find ways to include Apple as part of their digital ecosystem."

Microsoft might remain at the core of many enterprise approaches but Foulsham says IT leaders must recognise that Apple provides great hardware and software. "Their devices are hugely popular for a reason -- they're very easy to use and employees benefit from that usability," he says.

"Like other key suppliers in the market, Apple is helping organisations to embrace digital technology. We use iPads and iPhones, and key tools, like FaceTime. Apple has already become a key element in our digital ecosystem."

2. Prepare to put in a lot of groundwork in terms of integration

Linklaters CIO Matt Peers joined the firm in May 2015, and the company has been moving from BlackBerry devices to iPhones for many staff: everyone who works for the firm from the back-office to the chief executive receives a corporate-supplied smartphone. But the firm also uses Microsoft Windows 10 devices and is a big user of the Office productivity suite.

The readiness of your business for Apple, says Peers, is often closely related to your firm's reliance on other vendors, particularly Microsoft. "If your enterprise has still got a significant Microsoft estate, then you need to be aware that the two worlds don't talk very well to one another," he says.

Peers says his IT function has spent a lot of time trying to create stronger bonds between Microsoft and Apple technologies. The firm, for example, runs email in Exchange and the IT team dedicates a great deal of effort to ensuring the devices and email servers are in synchronisation.

"It's a task for IT to make that work," he says. "The good news is that Apple and Microsoft have started to come a lot closer together in recent times. You have to hope as a CIO that they'll bring the two worlds even closer. But they are quite disparate and we have to do a lot of work to create harmonisation."

3. Listen to the requirements of your end users

The simple message, says Mark Ridley, group technology officer at venture builder Blenheim Chalcot Accelerate, is that Apple is now a part of the mainstream -- but like Peers he says there are still challenges to overcome, particularly around application compatibility.

"I see very large enterprises which incorporate Macs very successfully into what they do," says Ridley. "Sometimes, however, those experiences aren't as good as they could be. Some of that is related to the fact that individuals are often using the Microsoft stack on a Mac, which would probably run better on a Windows machine."

Ridley has worked in interim positions where the majority of technology is Microsoft-based, and he also believes it is important to recognise that Apple and Microsoft operating systems are not the sole issue for businesses.

"If you were to tell a bunch of data scientists that they couldn't use Linux, they'd probably get very irritated," he says.

In the end, users at every organisation will prefer particular flavours of technology -- and each platform has its merits. "I guess the key point is that all the operating systems can be made to work. The key differences now relate to ease-of-use, rather than questions about the inherent security of each operating system," says Ridley.

"People are so comfortable using technology now that the sense of familiarity is a really big part of experience."

4. Recognise that tried-and-tested has a strong business use case

Toby Clarke, interim head of IT at Moorfields Eye Hospital NHS Foundation Trust, says there are still big questions surrounding the readiness of Apple in an enterprise context. Clarke, for example, says Apple devices are not standard within his current organisation.

"The NHS has established a long-term relationship with Microsoft, so a lot of the kit you see is Windows-based," he says. "Moving away from that environment is a cost that most IT and business managers will not take on."

Clarke says it is also worth noting that Microsoft provides a great stack. "It works -- in productivity terms, it does exactly what it says on the tin," he says. Clarke says Apple is still better suited to specific environments, particularly startup organisations.

"It's right for certain types of business, particularly those that can afford to take more of a risk," he says. "It works well for organisations that want to be seen to do be doing something different. Apple can provide that opportunity -- but in many organisations, safe and steady still often wins the race." 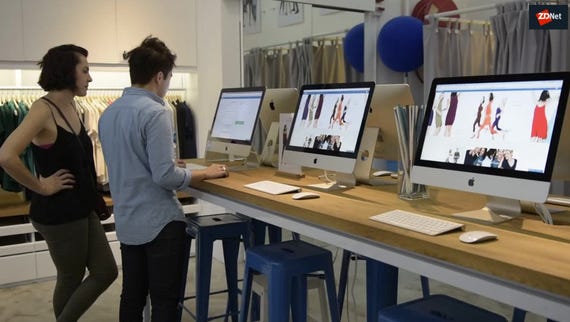 Read more about Apple in the enterprise