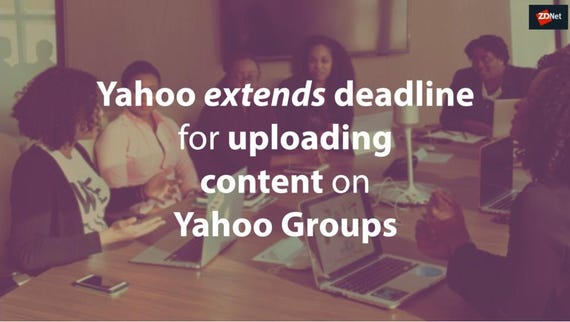 Verizon, which bought Yahoo In 2017, has suspended email addresses of archivists who are trying to preserve 20 years of content that will be deleted permanently in a few weeks.

As Verizon announced in October, the company intends to wipe all content from Yahoo Groups. As of December 14, all previously posted content on the site will be permanently removed.

Verizon planned to allow users to download their own data from the site's privacy dashboard, but apparently it has a problem with the work of The Archive Team who wants to save content to upload it to the non-profit Internet Archive, which runs the popular Wayback Machine site.

"Verizon has also made it impossible for the Archive Team to continue using semi-automated scripts to join Yahoo Groups – which means each group must be rejoined one by one, an impossible task (redo the work of the past four weeks over the next 10 days)."

News of the apparently aggressive move from Verizon was first reported on boingboing.net.

The Yahoo Groups Archive Team argues that it is facing a near total "80% loss of data" because Verizon is blocking the team members' email accounts.

The Yahoo Groups site isn't widely used today but it was in the past. The size of the archive that the group is trying to save is substantial and the group had saved about 1.8 billion messages as of late 2018.

Verizon has issued a statement to the group supporting the Archive Team, telling concerned archivists that "the resources needed to maintain historical content from Yahoo Groups pages is cost-prohibitive, as they're largely unused".

The telecoms giant also said the people booted from the service had violated its terms of service and suggested the number of users affected was small.

"Regarding the 128 people who joined Yahoo Groups with the goal to archive them – are those people from Archiveteam.org? If so, their actions violated our Terms of Service. Because of this violation, we are unable reauthorize them," Verizon said.

"Also, moderators of Groups can ban users if they violate their Groups' terms, so previously banned members will be unable to download content from that Group. If you can send the user information, we can investigate the cause of lack of access."

SEE: Yahoo announces all content on Yahoo Groups will be permanently removed

Additionally, Verizon mentioned that the email functionality of the platform will still continue to work, at least for members who haven't been expelled.

"While users will no longer be able to post or upload content to the site, the email functionality exists. If you are having issues with this feature, please reach out to YahooGroupsEscalations@verizonmedia.com and we will work to fix the problem with any delay," the Verizon spokesperson wrote.

UPDATE – December 11, 2019: Verizon has told ZDNet that it wants to support Groups users through "the next phase of the transition" by providing a way to download previously posted content.

"Yahoo Groups is not going away – but we are making adjustments to ultimately serve you better," a Verizon spokesperson said.

"In response to our users' requests, we have decided to extend the deadline for requesting to download data from Yahoo Groups to Friday, January 31, 2020 at 11:59pm PST.

Verizon said individual Groups users can use a tool that it has provided to download any content they posted.

Although the content will no longer be available or viewable from the groups.yahoo.com site after Sunday, December 15, 2019, Verizon said it would not delete it until all requests submitted before the deadline have been completed.

"We will also extend the deadline for converting all public Yahoo Groups to restricted groups, which require moderator approval, until January 31, 2020."

Verizon added that users can email YahooGroupsEscalations@verizonmedia.com for additional support.

"Our team will troubleshoot any issues to ensure nothing is deleted until users receive their content."