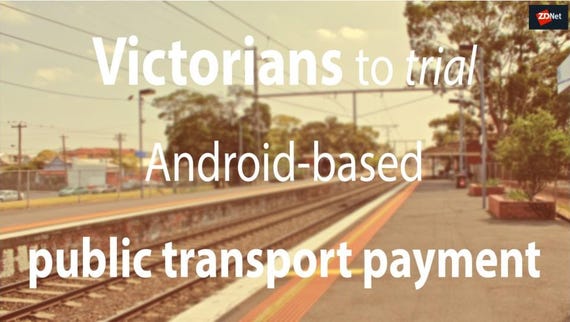 The Victorian government has announced a trial that will see up to 4,000 commuters use an Android smartphone to pay for public transport.

Myki is the contactless smart card ticketing system currently in use by buses, trains, and trams across Melbourne and regional Victoria, boasting more than 17 million active cards and 700 million transactions each year.

The new payment option falls under the next phase of its mobile myki trial. Mobile myki allows passengers to buy a myki, top up, and touch on and off using their Android smartphone.

Passengers will be able to buy full fare, concession, child, and senior mobile myki's using both myki money and myki pass. Auto top up will also be available.

The first phase of the trial saw a handful of industry-based testers, which was announced in May.

"It's so exciting to see this cutting-edge technology take the next step -- with thousands of passengers getting chance to trial mobile myki," a statement from Minister for Public Transport Melissa Horne said.

"This is a great opportunity for passengers to help us shape the next generation of transport ticketing.

According to Horne, the trial, delivered in partnership with Victoria's ticketing provider NTT Data, uses all existing myki ticket gates and readers at train stations, trams, and buses, without the need for any new infrastructure to be built.

Speaking previously on the idea of opening up Australia's public transport system to be cross-jurisdictional, Lance Blockley, managing director of The Initiatives Group, a consultancy firm that provides analysis and guidance for those playing in the payments space, said the myki system would make it a difficult proposition.

"You'd love the idea of all of the main metro areas in Australia to be openloop because you could go to any city and just tap-on and tap-on," he said. "Melbourne will be a problem."

Blockley was part of the evaluation committee that chose Cubic to rollout the Opal functionality for Transport for New South Wales. He said Cubic was chosen as it fulfilled a part of the requirement that asked all of the hardware to be installed from day one with openloop compatibility.

"In the London system they had to rip out all of the touchpads in the tube and reinstall because they weren't EMV [Europay, Mastercard, Visa] capable," he said. "But here, we are fortunate enough to have the right equipment."

Horne said the state government is working on exploring options for making mobile myki available on other smartphones. She also said the existing physical myki card will remain in use across the network during and after the trial.

Currently in NSW, commuters using public transport can pay with debit and credit cards, in lieu of using an Opal card, across the Sydney Trains network and on any NSW Train Link Opal service.

This includes smartphones and smart devices that have NFC payment capability.

Commuters using a PayPass or PayWave-enabled debit or credit card can now use their card or linked smartphone or wearable device across the Sydney Trains network.

The Victorian government has handed NTT Data a seven-year contract to work on improving the existing Myki transport ticketing system.

The Victorian auditor-general's office has tabled a report into the state transport's Myki ticketing system, with the auditor-general left less than impressed.