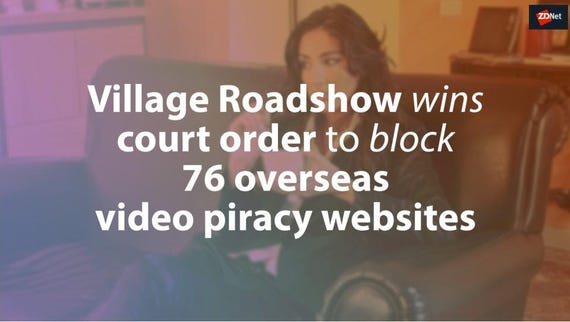 Village Roadshow has emerged victorious yet again in its legal battle against piracy, with the Australian Federal Court granting an application for carriage services providers (CSPs) to block 76 overseas hosted websites that linked, streamed, or torrented movies and TV shows.

At court on Wednesday, Justice Nicholas ordered an injunction under section 115A of the Copyright Act for the CSPs -- Telstra, Optus, Vocus, TPG, and Vodafone -- to take reasonable steps to block their customers from accessing the 76 sites that infringed copyright.

See also: Game of Thrones has the most malware of any pirated TV show (CNET)

Under section 115A, the court can order for CSPs to disable access to an online location outside Australia if it has the primary effect of facilitating infringement of copyright.

The studios will pay a AU$50 fee per domain they want to block, with the websites to be blocked within 15 business days. ISPs that fail to take reasonable steps will be required to notify Roadshow of the steps it has implemented.

It also upholds the trend of Australian courts blocking hundreds of torrenting and streaming websites in an increasingly speedy way after the amendment to the site-block laws were passed in late November.

The amendment allows for faster blocks of mirror sites, reduces the burden of proving that a site is hosted outside of Australia, and expands the legislation to sites that not only have the "primary purpose", but also to those that have the "primary effect" of infringing copyright, the government said at the time.

A series of music copyright holders have sought the block of sites that allegedly allow users to download YouTube videos and strip them down to audio files.

Subtitle piracy: Will it be enforced in Australia?

Roadshow has argued that pirated subtitle files infringe the copyright of literary works of screenplays.

It will be easier to block mirror sites under the amendment, with online search engines also now included.

The piracy site-block expansion should be passed by Parliament, a Senate committee has recommended.