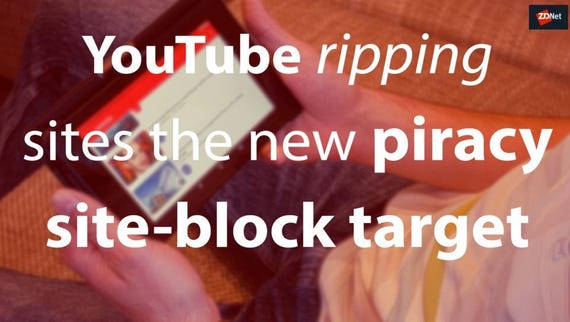 Australian copyright holders are taking advantage of the recently amended piracy site-block laws, under the Copyright Amendment (Online Infringement) Bill 2018, to target sites that allegedly allow users to rip the audio content out of YouTube videos.

According to counsel for the Australian Performing Rights Association (APRA), this case is "somewhat different" to the previous site-block cases that have come before the Federal Court, in that "the online locations don't themselves provide content or means to get content".

"What they do is allow one to take YouTube videos and download them and therefore have a copy of them," he explained to Justice Perram during a case management hearing on Tuesday morning.

"YouTube has the right to communicate it ... but it doesn't have the right for people to download a copy of it."

These sites allegedly allow users to not only download the video file but to strip out the video and be left with just the audio file, which he argued is in competition with legal music streaming services such as Spotify and Apple Music.

According to counsel, this falls into the amended form of s115A of the Copyright Act, in that it has the primary effect of facilitating infringement of copyright, rather than the primary purpose.

The hearing has been set for April 9.

The amendment to the site-block laws was passed in late November, expanding from carriage service providers to online search engine providers.

The Bill also allows for faster blocks of mirror sites, reduces the burden of proving that a site is hosted outside of Australia, and expands the legislation to sites that not only have the "primary purpose", but also to those that have the "primary effect" of infringing copyright.

"The government has zero tolerance for online piracy. It is theft, and damaging to our creative economy and local creators. We are committed to protecting Australia's creative industries and the world-class content we produce every year," Communications Minister Mitch Fifield said.

The amendment -- which will be reviewed in two years -- followed a Senate committee recommending for it be passed as is, despite objections from global tech giants and research conducted by government that showed piracy is decreasing every year.

The passage of the amendment also came despite the successful track record of the existing legislation -- which passed both houses of Parliament in mid-2015 -- in blocking hundreds of torrenting, streaming websites in an increasingly speedy way, as well as its recent expansion to smart TV boxes and sites providing subtitle files.

Under the initial Federal Court ruling, rights holders are to pay a AU$50 fee per domain they want to block, with the websites to be blocked within 15 business days.

Subtitle piracy: Will it be enforced in Australia?

Roadshow has argued that pirated subtitle files infringe the copyright of literary works of screenplays.

It will be easier to block mirror sites under the amendment, with online search engines also now included.

The piracy site-block expansion should be passed by Parliament, a Senate committee has recommended.