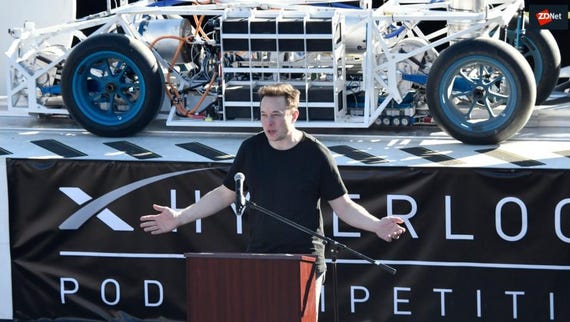 Virgin Hyperloop has conducted the first test run with human passengers at its DevLoop track in the desert just outside Las Vegas.

On Sunday's test run, the two passengers in the hyperloop pod were Josh Giegel, Virgin Hyperloop's co-founder and chief technology officer, and Sara Luchian, the company's director of passenger experience.

The company has carried out over 400 unmanned tests, with its first manned test propelling the pair in the new XP-2 pod inside a vacuum tube at 107mph around the 500-meter, 547-yard, track.

"With today's successful test, we have shown that this spirit of innovation will in fact change the way people everywhere live, work, and travel in the years to come," said Sir Richard Branson, Virgin Group founder.

SpaceX and Tesla CEO Elon Musk outlined his ideas for a hyperloop transport system in a 2013 paper, Hyperloop Alpha. He envisaged a service running at 760mph (1,200kph) between Los Angeles and San Francisco, which would be cheaper and faster than a proposed high-speed rail link.

Virgin Hyperloop hopes the manned test demonstrates to investors and councils around the world that the high-speed system is safe and comfortable for humans to use.

Luchian told the New York Times the ride was "much smoother than I expected" while Giegel said it felt similar to accelerating in a sports car.

"I can't tell you how often I get asked 'is hyperloop safe?'," said Jay Walder, CEO of Virgin Hyperloop.

"With today's passenger testing, we have successfully answered this question, demonstrating that not only can Virgin Hyperloop safely put a person in a pod in a vacuum environment but that the company has a thoughtful approach to safety, which has been validated by an independent third party."

Virgin Hyperloop's tests so far are a long way off the 700mph speeds Musk envisaged. The company's record speed was set in 2017 at 240mph (387kph).

The company raised $50m with Caspian Venture Capital and DP World in 2017 and rebranded as Virgin Hyperloop One after Virgin Group invested in the company in October of that year.

Last month, Virgin Hyperloop announced plans to open a Hyperloop Certification Center (HCC) in West Virginia. The US Department of Transportation has also released guidance as a first step to creating a regulatory framework for hyperloop in the country.