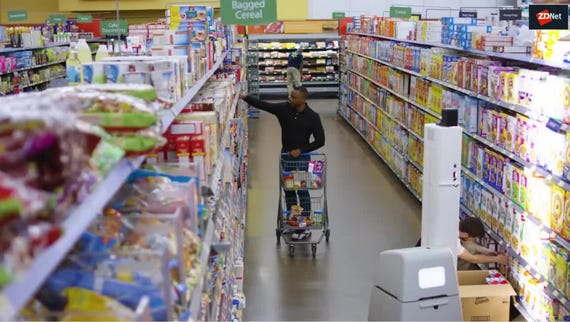 No more Uber, Hertz, or even car owners: How Amazon and Apple will take us all for a ride As driverless technologies improve, cars will likely become more of a membership perk than objects of ownership.

Walmart is taking its grocery delivery program nationwide, as the company steps up its battle with e-commerce behemoth Amazon.

The world's largest retailer said Wednesday that it's expanding grocery delivery to more than 100 metro areas across the country by the end of this year. The push will help make Walmart's delivery service available to roughly 40 percent of US households.

The service, available today in six markets, has been a key focus for Walmart over the last two years as it's tinkered with the economics of delivery programs. Before committing to a national expansion, Walmart had to first figure out how to cut shipping costs and make grocery delivery a more efficient and scalable part of its business.

To that end, Walmart partnered with Uber in 2016 when it kicked off a grocery delivery pilot program that also included Lyft and Deliv. The retailer experimented with other last-mile delivery options since then, including a pilot that has store associates delivering online orders on their way home from work.

Walmart is building on those past pilots with this latest delivery expansion, noting that delivery will be accomplished through a combination of "Walmart's personal shoppers and crowd-sourced delivery services."

At long last, it seems Walmart has finally figured out how to leverage its massive brick-and-mortar footprint -- where 90 percent of the US population lives within 10 miles of a Walmart store -- to bring down costs and expand online grocery services more rapidly than the rest. Tom Ward, vice-president of digital operations for Walmart US, touted Walmart's brick-and-mortar infrastructure in today's press release, noting that it gives the company a "unique opportunity" in delivery.

But the Amazon threat still looms even with Walmart's sizable physical footprint on its side. Since Amazon's Whole Foods acquisition, the ecommerce giant has made an aggressive play for the grocery market -- Walmart's most profitable category. Amazon is using Whole Foods to deliver fresh groceries to Prime customers in a handful of US markets and plans to expand the service nationally in 2018.

Competition between the two companies goes well beyond grocery. Walmart and Amazon are in a constant price war, prompting Walmart to turn to its acquisition of Jet.com to implement a "basket economics" strategy. In a nutshell, basket economics is an e-commerce ops strategy that stresses logistics and supply chain to reduce costs.

In April of last year, Walmart launched the basket economics-inspired Pickup Discount service, which offers customers reduced prices on online-only items if they opt to pick up their orders in-store. By all accounts, Pickup Discount is yet another way for Walmart to cut down on last-mile delivery costs, which tend to be the most expensive part of online order fulfillment.

Walmart changing legal name as its digital strategy ramps up

Wal-Mart to Walmart: The retail giant is booting "Stores" from its legal name as e-commerce grows.

Join Discussion for: Walmart steps up Amazon battle with nationwide...