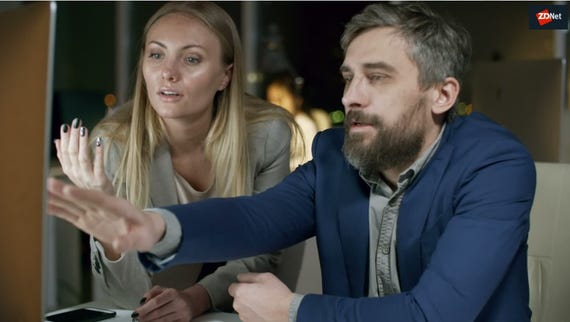 If you want to give your tech career a boost, then you've probably considered getting into data science. There has been a 56 percent increase in job openings in the US over the past year, according to LinkedIn. So, how can you get into data science? Five industry experts, who spoke at the recent Big Data World event in London, provide their best-practice tips.

1. Have a look at free online courses…

Richard Freeman, lead data and machine-learning engineer at fundraising specialist JustGiving, says there is significant buzz around the area of data science. He advises any interested IT or business professionals to dabble in some of the free education platforms online.

"The difference between now, and when I did my PhD, is there's more information. In the old days, you'd have to go through a training course – such as with someone like IBM – and you'd get upskilled that way. Now, the courses are free," he says.

Freeman says all kinds of people are keen to develop data-science skills. These individuals aren't just graduates. Professionals in existing jobs from a traditional business background also want to upskill.

"People know this area is very exciting – they believe, as the Harvard Business Review suggests, that it's the sexiest job of the twenty-first century. On the internet, there's more courses on platforms like Coursera and Udemy than ever before," he says.

2. …but develop depth to gain a competitive advantage

Alejandro Saucedo, chief scientist at UK-based thinktank the Institute for Ethical AI & Machine Learning, says the first thing prospective data scientists should understand is that data science is probably not as sexy as they think. It's also likely to be tougher to learn than they might perceive.

"Data science is not as easy as simply jumping on a Coursera session – you won't become an expert. The most important thing to understand is you need depth, not just breadth – you need to specialise," says Saucedo.

He says the job title 'data scientist' is poorly defined and can mean many things, from an analyst in a field who understands business metrics to someone who can actually build code and extract insights from data.

Saucedo says some data scientists go deeper into operations, including those who learn to tweak the analytics engine Apache Spark in detail. If you're interested in getting into data science, you'll need to specialise eventually, too.

"Get a broad understanding and try different areas to find out what works best for you. Don't go into something you hate. Have the initiative to become more than just a pure data scientist. Just being able to work in one, specific vertical is no longer enough," says Saucedo.

3. Get your hands dirty by working with code

Mohammad Shokoohi-Yekta, who was until recently a senior data scientist at Apple, and who now teaches a course at Stanford University called 'An Introduction to Data Science', advises candidates to start working with code as quickly as possible.

"For people who don't have much background in this area, the first thing I always recommend is to get your hands dirty on code. Get used to problem-solving and coding if you want to learn how to apply data science," he says.

Shokoohi-Yekta says data science is a hot topic. His course is the most popular at Stanford right now, with 500 people on the waiting list every quarter. Those interested in data science also recognise there's lots of job opportunities. But learning the theory of data science is just the starting point.

"It's more than getting knowledge about concepts, looking at some slides, and thinking you know what machine learning is about. Our course at Stanford covers 50 percent concepts and the other half is about getting your hands dirty on code, specifically in R and Python," says Shokoohi-Yekta.

"If you're thinking about getting started in data science, you should definitely be very comfortable with code and applying data science, rather than being theoretical."

4. Make sure you have a strong business understanding

Claus Bentsen, executive director at pharmaceutical giant Astra Zeneca, hires data scientists for his organisation and agrees that the hands-on component is critical when looking at candidates. He advises people keen on entering the field to work on projects, whether that's on your own, studying, or as part of a business environment.

"You have lots of people who can talk, but we bring people through our screening processes and we test them to make sure they can really solve problems. That's how we sort the winners from losers," says Bentsen.

Astra Zeneca also trains internal staff to become data scientists. Bentsen says it can be difficult to take people with generic maths, machine-learning and data-science skills and push them into different areas of the pharmaceutical business. So, the firm often spins the approach around and instead looks to transition people that have a general business awareness into data science.

"The business understanding is very important when it comes to problem-solving," says Bentsen. "We have people who have been working in the business and who we transition into data science skillsets through various training programmes. And again, we get those people to work on real problems."

5. Create a great portfolio of experience

Krish Panesar, CTO at health specialist Diabetes Digital Media (DDM), says the key element that will get you into data science is experience. "Whether that's at home or in a company – it doesn't really matter where. Get some experience and get a portfolio," he says.

Other experts suggest it makes sense to join Tableau Public, which is a free service that lets anyone publish interactive data visualisations to the web. This service allows data scientists to share their work with interested parties – and a portfolio in Tableau Public is often viewed as an essential asset for data-manipulating job seekers.

Panesar, who was head of machine learning at DDM before becoming CTO last year, says there have been numerous occasions where his organisation has encountered machine-learning applicants who have no portfolio.

"And if you're looking to upskill, or if you have moderate experience levels, I would definitely look at picking a specific part of the production line and specialising in that area."

IT strategy: Learning from experiments with emerging technologies

It can be tough to find the right fit for emerging technologies; that doesn't mean it's wrong to test out new ideas.

Move over HR: Why tech is taking charge of company culture

As companies are engulfed by change, maybe techies can help staff make sense of it all.

Formula 1: How faster access to data is giving this team the edge

CIO Strategies: Making sure your best staff stick around is about more than just money.

Data scientists' wages decline for the first time since 2016 (TechRepublic)

A recent report shows a 1.4% decline in pay for data scientists. Karen Roby talks with a Glassdoor analyst about the reasons behind the dip.

Facial recognition: Apple, Amazon, Google and the race for your face (CNET)

Facial recognition technology is both innovative and worrisome. Here's how it works and what you need to know.

Join Discussion for: Want to be a data scientist? Five ways to...