3D printing is one of the notable tech developments to watch for 2014, but it's unclear whether the parts and conditions are in place to truly go mainstream for consumers and enterprises. 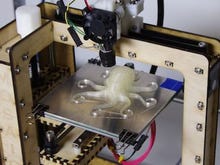 Based on what we know today, it's clear that 3D printing has a much better chance to go mainstream with enterprises first. After all, companies like 3D Systems are large enough to have strong relationships with manufacturers. Stratasys is another large player with innovative technology and enough of track record for IT buyers.

Wall Street analysts project that the largest 3D printing players will have $1 billion in revenue by the end of 2016, about double from sales estimates for 2013. High-end systems, about $1 million a pop, are used in manufacturing operations and driving sales.

Join Discussion for: What 3D printing needs to go mainstream