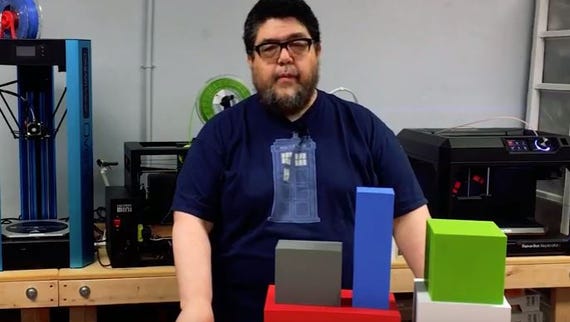 One of the most fundamental decisions you can make when choosing a 3D printer is the size of the build area. While printer prices vary for many different reasons, it's pretty much a constant that the larger the build area, the more expensive the printer.

In this edition of DIY-IT's 3D Printing Discovery Series on ZDNet, we'll take a hard look at the different build areas available for different 3D printers and then I'll take you into the dark underbelly of the 3D printing world to show you what manufacturers don't want you to know: the truth about 3D printer build areas.

This was a much bigger and more complex project than I expected and it took a whole lot of filament to produce the build area samples used in my testing. So before I get started on the details, I'd like to shout out a thank you to the folks at ColorFabb for providing the filament used in these examples. I'd also like to shout out to MakerBot, Ultimaker, Lulzbot, Dreammaker, and New Matter for providing unrestricted access to their printers so I could perform these tests.

Put simply, when a manufacturer specifies a maximum print areas (also known as a build area), it's the maximum size of an object the printer can (theoretically) print. Technically, a 3D shape that's not equidistant on all sides isn't a cube, it's a cuboid or a convex polyhedron bounded by six quadrilateral faces.

The accompanying video shows what the build areas look like for the five printers I have here in the shop. I designed and printed shapes that represent the maximum build areas for each of these printers. I've posted each of these on Thingiverse with links below, you can print your own sizing templates.

Here they are in the printers. You can start to see how they relate to each other in size. From left to right, you're looking at the New Matter MOD-t (silver), the Dreammaker Overlord Pro Plus (blue), the LulzBot Mini (green), the Ultimaker 3 (white), and the MakerBot Replicator+ (red).

Another way to look at these is by stacking them together. In the video, you can really see how they differ in size when placed inside of each other.

Also, don't confuse what may look like available build area with actual, functional build area. For example, on the Overlord Pro, it looks like the model of the Vanderbilt Mansion would print. But if you compare the model with the actual buildable area, the mansion just won't fit. A mighty fine stack of three and half Yoda heads would easily fit in the Overlord's build area, but not the Vanderbilt Mansion. On the other hand, the mansion does easily fit in the build area of the Lulzbot.

As I alluded to at the beginning of this article, there's a lot about build areas that are misleading. Of the five vendors, not one specified a maximum print size that I was actually able to print.

On the MakerBot, the full cube I started to print began to disintegrate near the end, and I wasn't able to complete that print. On the Overlord, Cura wouldn't accept the dimensions specified on the Dreammaker site, except for the vertical Y-axis dimension. When I printed a test bar, the Overlord Pro wasn't able to actually meet that height and caused a very messy jam.

New Matter's slicer accepted a model for printing, but after two tries, you can see just how messy the results were. Once I reduced the model's size, it eventually printed. In the case of both the Lulzbot and the Ultimaker, Cura simply wouldn't accept a model sized for the maximum printable area described in the specs for each printer.

After a lot of test prints, here's what I found.

*There's a trick to making this work. See the article below.

I tested with both extruders active, and my best results were 185 millimeters long by 188 millimeters deep by 200 millimeters high, so length and width were more than a centimeter smaller than specified, at least for a true rectangle. Ultimaker says that you can increase this a bit if you have longer areas in the middle, but you can't go all the way out in the corners. In any case, like the other vendors, the company didn't meet it's published spec.

UPDATE: The LulzBot folks reached out to me and described a trick (changing the Skirt Line Count in Cura) that lets it print to the full 152x152 spec. I tested it and it works. Here's a short video that shows how it's done. Very cool.

Getting to know the LulzBot Mini multi-filament printer

In this installment of our 3D Printing Discovery Series, we welcome a new printer to the shop. Join David Gewirtz in getting to know the LulzBot Mini 3D printer, a printer that's capable of printing many different types of materials.

The Overlord is interesting, because the Delta architecture means it should print cylinders that have a large diameter than the length and width dimensions of a cuboid. That said, for consistency sake, I went with squared edges. Dreammaker specifies 125 millimeters long by 125 millimeters deep by 280 millimeters high. The width and height weren't even close, at 79 millimeters by 79 millimeters. Even though I'm using the taller Overlord Pro, this was the only printer that completely failed at its specified height. Instead of 280 millimeters, the best I got without making a mess was 255 millimeters. Essentially, the Overlord's maximum specified print area was about 25 percent more than reality.

So now that you've seen the results of my little study, what does it all mean?

My recommendation is that you do't freak out too much about the fact that the specified maximum build dimensions and the actual ones are slightly different. In most cases, the difference is a centimeter or less.

That said, if you're buying a 3D printer for a project that is tightly dependent on certain dimensions, you should make sure to factor into your decision the fact that the build area documented in the specs is lightly to be optimistic by about 5 or 10 percent. If you're particularly dependent on an exact size, ask the vendor to print a part sample to see what the machine will produce.

Beyond that, if you're in the market for a new 3D printer, think carefully about how much build area you really need. Since build area is one of the most fundamental drivers in printer price, you save money and get a lot more capabilities in a printer if you're willing to sacrifice some build area. Conversely, if you need to print larger objects, you'll definitely need to be aware that size does matter when it comes to your buying budget.