Despite all the pizzazz of the launch day, consumers and businesses tend to adopt a leisurely pace when upgrading to the newest version of Windows.

Despite being released six years ago, for example, Windows 7 still accounts for nearly two-thirds of all PCs accessing the internet (roughly 61 percent) today, according to the latest data from NetMarketShare. Windows 8, which first went on sale nearly three years ago, is still languishing at around 13 percent. 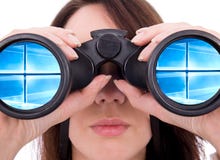 However, there's every indication that things will be different this time around, for one simple reasons: for the majority of home users at least - those with Windows 7, Windows 8.1, and Windows Phone 8.1 devices - Windows 10 is a free download. For many, getting Windows 10 will be a matter of a couple of mouse clicks, removing two of the biggest barriers to upgrading: a lack of cash and a surfeit of inertia.

But before deciding whether to move to Windows 10, the first thing consumers need to do is check whether you can actually upgrade.

For devices running Windows 7 service pack 1 or Windows 8.1 Update (with Windows Update enabled) the 'Get Windows 10' app should show up automatically as a Windows icon in the system tray at the bottom right-hand side of the screen. If you can't see it, that may be because your PC is not up to date or you may have Windows Update turned off - or you're running a pirated version of Windows.

PCs that Microsoft decides cannot run Windows 10 will not show the Get Windows 10 app before 29 July, but they will see it after launch, and can use it to check their PC's compatibility.

If you want to get a headstart on the upgrade process, you should 'reserve' your download. Reserving just means the files you need for the upgrade at the end of the month will be downloaded to your PC ahead of time, to make the final installation quicker. You can still cancel the download before launch day if you want.

Once you know whether your PC can be upgraded to Windows 10, the next hurdle is working out when Microsoft will actually let you upgrade. Just because Windows 10 is released on Wednesday, that doesn't mean that you'll be using it by Thursday. When you are able to upgrade to Windows 10 depends on who you are.

As of Wednesday 29 July, Microsoft will start offering Windows 10 to its five million Windows Insiders, the enthusiasts who have been testing various builds of the operating system before launch.

After that, Microsoft will offer Windows 10 to customers who have reserved their copy already. This will happen in waves, gradually increasing in size, after 29 July.

As a result, users shouldn't necessarily expect to be able to download Windows 10 right away, as Microsoft has cautioned: "Some notifications will go out as soon as Windows 10 is available; others may go out in the weeks or months following." Microsoft is expecting a billion upgrades to Windows 10 - hence the staggered approach. Devices with the least issues in terms of driver and application compatibility are likely to get their upgrade first, according to ZDNet's Mary Jo Foley.

So it could actually be some time after launch that you'll decide whether to upgrade. There are ways to skip the queue, however - you could simply buy a copy of Windows 10 and install it yourself, which does away with any uncertainty about when your Windows 10 wave will finally arrive.

When you do get the notification that you are ready to go, you then have a few things to consider.

At the most prosaic level, make sure you've got enough time: plan for installation to take an hour; if you've got a new-ish PC it might take more like 20 minutes, for an older piece of kit an hour won't be long enough.

Also, be aware that you don't have forever. At the moment, Microsoft is only promising that Windows 10 will be a free upgrade in the first year after launch, so if you are eligible and don't want to pay for the upgrade, you still have a deadline - albeit rather a long one - right there.

Other things to consider include how adventurous you are feeling. Sure, Windows 10 has been through a lot of testing, but there will be some bugs in there, as Microsoft acknowledges: "Each day of the roll-out, we will listen, learn and update the experience for all Windows 10 users," Windows chief Terry Myserson said. If you make the jump early, you may find the odd bump along the way, which will be smoothed out by the time the slightly later adopters take the plunge.

Equally, if you have a pressing need for some of the new features in Windows 10 - Cortana or the new Edge browser, for example - then it may be worth making the jump sooner. The state of your hardware and existing operating system is another consideration: for example, my colleague David Gewirtz has no intention of upgrading any of his Windows 7 devices to Windows 10: "I'm leaving well enough alone," he says. In contrast, Ed Bott expects 90 percent of Windows 8.1 devices to upgrade at some point.

For business users, of course, this is all out of your hands: it's going to be the IT manager and the CIO who decide when you get an upgrade.

The timing is also slightly different for business users: Windows 10 Pro will be available on July 29, along with Windows 10 Home, and volume licensing customers will be able to download Windows 10 Enterprise and Windows 10 Education on Volume Licensing Service Center as of August 1.

Nobody is expecting enterprise customers to leap in with enterprise-wide upgrades on day one. Big businesses tend to trail far behind home users because they usually face much larger headaches in terms of application compatibility, as well as the sheer time and effort it takes to upgrade and check hundreds or thousands of individual machines.

Are you planning to upgrade to Windows 10 as soon as you can? Let us know what you think by posting a comment below.

Join Discussion for: When should I upgrade to Windows 10?