Seven years ago, Canonical moved the Ubuntu Linux from the Gnome 3.x interface to its own Unity front-end. By the release of Ubuntu 11.10, Unity had become 's default desktop. Even in these early days, Unity was meant to more. The dream was for Unity to become a universal interface for PCs, , and . It was a dream destined not to come true.

In early April 2017, Canonical founder Mark Shuttleworth announced that Ubuntu was switching back to Gnome. Shuttleworth explained, "I took the view that if convergence was the future and we could deliver it as free software, that would be widely appreciated both in the free-software community and in the technology industry, where there is substantial frustration with the existing, closed alternatives available to manufacturers. I was wrong on both counts. In the community, our efforts were seen fragmentation not innovation."

That means, he continued, "We will shift our default Ubuntu desktop back to Gnome for Ubuntu 18.04 LTS [long-term support]". This version will ship in April 2018. The next two versions, 17.04, which will be out shortly, and 17.11, which will be released in November 2017, will continue to use Unity 7.

Michael Hall, Canonical's community , added that with the end of Unity support, Canonical will no longer be investing in Ubuntu for the phone and tablet. While "the desktop will continue, [it will be] like it was in the pre-Unity days where we took what upstream [Gnome developers] and developed."

Of course, Ubuntu can already be used with a Gnome interface. Unlike other , in it's simple to desktop interfaces. Besides Gnome, Canonical officially supports Budgie with Ubuntu Budgie; KDE with Kubuntu; LXDE with Lubuntu; MATE with Ubuntu MATE; and Xfce with Xubuntu.

In the future, you will still be able to run Ubuntu with Unity 7. Shuttleworth said that "Unity7 will continue to be carried in the archive. I know there are quite a few people who care enough about it to keep it up to date. I expect it will be in universe for 18.04 LTS". What you won't be able to do is to run it with the never-finished Unity 8.

Unity is not a dead project. It just won't have official Canonical support. Indeed, sources tell me that Unity developers have been laid-off. Still, UBPorts' Marius Gripsgård, a well-known Unity developer, said on Google+, the social network that's used by many developers, "I'm not giving up! I will do my to keep Ubuntu touch and Unity8 on both its legs!"

That said, Unity8 is not in Canonical's official Ubuntu plans. Instead, as Shuttleworth wrote in a , Canonical will "move quickly to support the Ubuntu Gnome community with all the resources of Canonical to on stability, upgrades, , and experience."

What does that mean? Well, for starters, Canonical is giving up on its Mir display server for the desktop. Hall said, "We have no real choice but to use Wayland [the Red Hat-supported display server] when Ubuntu switches to Gnome. Using Mir simply isn't an ."

Away from the desktop, Mir will live on. Shuttleworth stated that "we have lots of projects using Mir as a compositor so that code continues to receive investment. I agree, it's a very fast, clean and powerful graphics composition engine, and smart people love it for that."

Going on about the desktop, Shuttleworth added, "We will invest in Ubuntu Gnome with the intent of delivering a fantastic all-Gnome desktop. We're helping the Ubuntu Gnome , not creating something different or competitive with that effort. While I am passionate about the in Unity, and hope Gnome may be more open to them now, I think we should respect the Gnome design leadership by delivering Gnome the way Gnome wants it delivered."

So, there you have it. In 2018, Ubuntu will default to Gnome with Canonical's full and active support both upstream and on its distribution. It will be interesting to how it all works out. 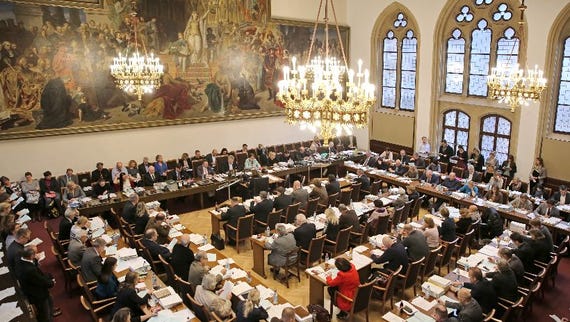 Join Discussion for: Where does the Ubuntu Linux desktop go from...