Why one Java developer jumped to Salesforce and hasn't looked back

A former Java developer explains why he made the jump to Salesforce and offers practical advice to software engineers considering a similar career change.
Written by Bill Detwiler on Sept. 22, 2019 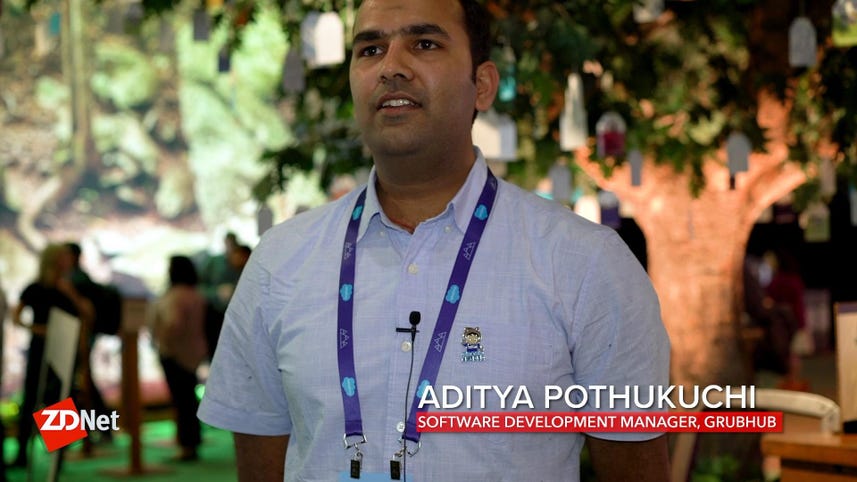 As a software developer, one of the most important decisions you make is what platform or language to focus on. The choice can depend on market conditions like the languages employers are looking for, but also on more personal factors like the type of work you enjoy doing.

I had a chance to talk with Aditya Pothukuchi, Software Development Manager, Salesforce Team at GrubHub, at Salesforce's annual developer conference, TrailheaDX, about how he made this choice. I was really impressed by the process he went through in deciding to jump from Java to Salesforce, so I asked him to tell me his story and explain why he took a risk on a whole new career path. I also think Aditya is a prime example of the intense loyalty Salesforce has cultivated among the people who build on, support, and use the company's platforms.

The following is a transcript of our interview, which you can watch above.

Aditya Pothukuchi: I started my career as a Java engineer, back in 2007, 2008. It's a recession time. I started as a Java developer, even entering into Java developer also, it's a big story. But, in 2,000 people they selected 20 people, and I am one among them. My monthly salary at that point of time is $98 American currency per month. That's where I started my career, and I continued like that for two years in that small company back in India. Because I need to work hard everyday like 14 hours, 15 hours and my track record in that company, like continuously working for 19 hours without any break. I worked like that and after two years completion in that company, we got a Salesforce project from Procter & Gamble, in that company. My manager encouraged me that yeah Aditya you can join in this team. There's a team of a senior developers and the one ... I'm one junior developer in that team, I was very nervous at that point of time. I told ... I went to my manager and I told that I don't want to go into this Salesforce or whatever stuff that you are saying because that is new to me. I want to be a Java developer, and I just wanted to continue in that. My manager told me "I have trust in you because you can learn" and they gave me two weeks of time to learn Salesforce and in 2008 there is no Trailhead and there are no free YouTube [tutorials].

There are some videos, but not how we are getting now the material, we [didn't] have that. They shared [with] me some PDF documents, still I how those Force.com fundamentals, Visualforce fundamentals, and Salesforce fundamentals. Those PDFs still, I'm saving them because those are my memories. I read those and I ... we learned there in that company, all seniors. Successfully, we implemented that [project], I ... not completely, I say learned within two weeks, but at least I understood what exactly Salesforce is and we delivered that project. Later, after a completion of two years we thought, I want to change my company to gain more knowledge and pursue my career. At that point of time, I needed to think [about] whether I need to go with a Java background, or do I need to go the Salesforce route.

I just spend some time, and I Google [and on the] internet. I prepared a sheet, kind of linked pros and cons with if I go with Java, pros and cons with Salesforce, then I finalized in my mind saying "let's go with Salesforce." I want to change my career, and I want to go like that. My seniors and all my mentors in that company, they warned me that you're taking a risk with your career. I told them "that's fine, I will take that risk. If that won't work, if I [do] not succeed, I can come back to Java, and I can just continue as a Java developer." Still Java is great, it will be there for sure, for complex applications and other things. Luckily, I just changed my job, and I entered into HCL technologies, another company. From their multiple companies, I changed. Now, I'm standing here in San Francisco, this is my first TrailheaDX. Two times I came to Dreamforce.

Salesforce gave me everything. Salesforce gave me a place where people recognized me and I was showcased in Salesforce media for I run [the] Schaumburg Salesforce user group. It's 200+ users already there, and everyone recognizing me saying "Hey Aditya" and saying "Hi", and taking pictures with me. I feel like a small celebrity, actually. These all happened because of Salesforce. Because of Marc Benioff and Parker Harris.

Developer explains the differences between developing on Salesforce and Java

Bill Detwiler: What are the differences between working as a Java developer and working on Salesforce?

Aditya Pothukuchi: Yeah. I can give a best example there. What are the development that I did for two years? Say I'm a front turn the page has to be developed and the table has to be displaying multiple checkboxes [or] multiple labels.

To do that, it takes at least two or three days for us to develop in Java. In Salesforce, the same functionality we implemented within a couple of hours, at that point of time I felt like this is so easy that [I have] no need to maintain my database tables, no need to maintain the connectors between Tomcat server, JBoss server, all this stuff I need to maintain because that is giving everything for me. I just need to concentrate on the problematic statement that was given by [the] business and what solution we are providing. That is a key thing that attracted me. I think this is simple, and as I have some Java background and EPICS languages similar to Java, right. No need to start from scratch and front-end JSP pages and everything I develop and Visualforce pages, beautiful.

I need to put a drop down list, I need to create a jQuery. I just ... now I can write EPIC scan and select list it displays me pick list value, that easy. That makes me ... this is beautiful. That attracted me towards Salesforce and also, I analyze because Salesforce has certifications and everything, right? I felt this is a continuous learning. It will be a journey for me in my career and that will greatly helped me and it helped, actually. Like I said, it helped me everything in my career professionally as well as personally, both.

Bill Detwiler: What do your former colleagues, who were initially a bit skeptical of your career change, think now.

Aditya Pothukuchi: They are now in the United States, they all shifted career and they are all into Salesforce. Because, that's not my credit or anything, because they also saw the growth of Salesforce, I took that chance because somebody has to take a step, right? That somebody is nothing but me in that company that took a step and I forwarded. They saw that "Oh this guy's growing in his career," initial stages. I think this is going in a good direction. Later they also changed and everyone are now in the United States and we are still good friends and we all, whenever we meet, we all share these memories, like how our lives change because of Salesforce and where we started and where we ended up. So this because of Salesforce.

Developer's decision to focus on Salesforce was a calculated risk

Clearly, Aditya believes his choice to focus on Salesforce development was an overwhelmingly positive career move. And while his decision may not be the right one for you or turn out as well, we can all learn from his process of being deliberate in his decision making, carefully weighing the pros and cons of his choice, and being willing to take a calculated risk.

Business
How to better manage Gmail labels (and why you should)

Productivity
How to use Android's lockdown mode and why you should