Seven 160MHz channels and 14 additional 80MHz channels to be capable of handling high bandwidth applications, the Wi-Fi alliance has said.
Written by Chris Duckett on Jan. 5, 2020 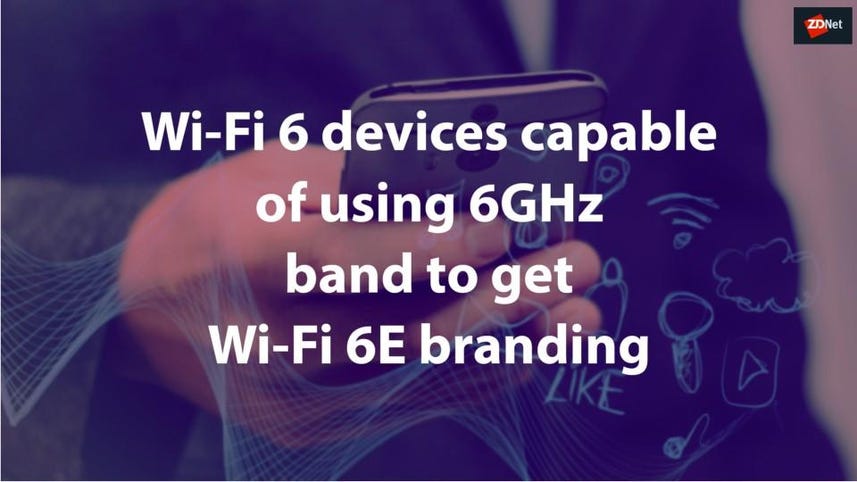 The Wi-Fi Alliance has said Wi-Fi 6 devices capable of making use of the 6GHz band will be branded with the Wi-Fi 6E name.

Within the 6GHz band is enough contiguous spectrum to provide 7 channels of 160MHz, and 14 channels of 80MHz of bandwidth, the alliance said. It added the extra spectrum is needed to handle high-bandwidth applications such as high-definition video streaming and virtual reality.

"6GHz is well suited to facilitate Wi-Fi's continued growth in these areas due to its adjacency to 5GHz where Wi-Fi already operates, greater availability of wider channel sizes, and accessibility to clear spectrum with less interference from legacy Wi-Fi 4 or Wi-Fi 5 devices," the alliance said.

"Wi-Fi 6E devices will leverage wider channels and additional capacity to deliver greater network performance and support more Wi-Fi users at once, even in very dense and congested environments."

Devices with Wi-Fi 6E branding are expected to appear once regulatory approvals around the world begin to happen.

"Wi-Fi has become the most important wireless technology for American consumers and businesses, and is projected to contribute almost $1 trillion in economic value to the United States by 2023," vice president of wireless standards and strategy at Aruba, Chuck Lukaszewski, said.

"As the application and overall demand for Wi-Fi continue to surge, access to the 6GHz unlicensed spectrum will enable Wi-Fi to continue delivering the vast innovations and socioeconomic benefits it is bringing to the market today while helping to ensure Wi-Fi can meet the new promises of the 5G era and beyond."

In September, the Wi-Fi Alliance announced the Wi-Fi Certified 6 program that allows companies like Apple and Samsung to officially label their devices as being able to support the higher-capacity IEEE 802.11ax protocol.

Tests carried out by sister site CNET show that Wi-Fi 6 transfer speeds are about 30% faster than Wi-Fi 5.

"The 2.4GHz band is often promoted as a better choice for longer range communications," Enex said in its report. "However, Enex's findings did not support this. Operating in the 5GHz band appears to be the best choice for consumers under all circumstances."

"The 5GHz band also has the benefit of more recent technology developments which includes features such as directional beamforming and MU/MIMO (with up to eight antennas and multiuser sub-channels)."

FBI: Use your phone's mobile data connection instead.

How will Wi-Fi 5 and WPA2 coexist with Wi-Fi 6 and WPA3? (TechRepublic)

The migration to Wi-Fi 6 is the most complex in roughly a decade, as a new authentication standard is necessary to ensure security integrity. How will the two standards coexist?

Spearheaded by the Wireless Broadband Alliance and conducted in an aerospace factory, the first phase showed that Wi-Fi 6 can work effectively in an environment with lots of noise and interference.

Smartphones
Matter is coming fall 2022 (fingers crossed), but why does that matter to you?