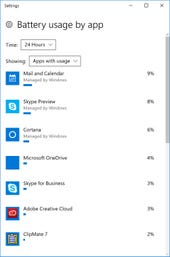 Is your laptop battery running down faster than you expected? Windows 10 can help you track down the culprits and rein them in.

Start in the Settings app. Click or tap System, then Battery to open an Overview page that tells you how much estimated battery life is left.

To get to the good stuff, look just under the Overview heading and tap Battery usage by app. That action opens a list showing battery use across all apps (including Windows desktop programs).

This feature has changed slightly since the initial release of Windows 10. In version 1607, the default view shows usage over the past 24 hours, but you can choose a different value from the drop-down list at the top to show the last 6 hours or the last week instead.

The Battery Saver option lets you clamp down on background tasks when the remaining battery level drops below a threshold you define (20 percent, by default).

If you're running on battery power in an area where you have poor network reception or you just don't want to be disturbed by background notifications, consider switching into Battery Saver mode temporarily. Just tap the battery icon on the right side of the taskbar and then tap Battery Saver.

Next tip: Reclaim precious disk space with these storage tools