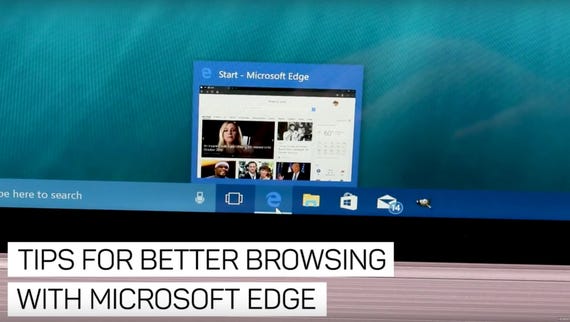 It's a new year and Microsoft wants its Windows 10 users to give Edge a chance, rather than merely using the browser to install Chrome.

"Microsoft Edge is up to 48 percent faster than Google Chrome," Microsoft says in one of the 30-second ads.

Not only that, but Microsoft argues that Edge is safer too, thanks to SmartScreen, its built-in equivalent of Google's Safe Browsing anti-phishing technology. Microsoft says: "Edge blocks 18 percent more phishing sites than Google Chrome."

Microsoft doesn't cite the source of this statistic, but in October, NSS Labs released a report comparing Edge on the locked-down Windows 10 S with Chrome on Chromebooks, suggesting that Edge blocks more phishing URLs than Chrome.

A month earlier, Google released reports that it commissioned from two independent security firms that found Safe Browsing is more accurate than SmartScreen.

The other ad Microsoft published pits Edge against Firefox and Chrome in a battery performance test on a Surface Book running Windows 10 Fall Creators Update edition.

The time-lapse video shows the three browsers running an HD streamed video on a continuous loop until each device's battery is exhausted.

Edge comes out on top, lasting 16 hours and eight minutes, versus Chrome's 13 hours and 31 minutes, and Firefox's nine hours and 52 minutes.

Microsoft doesn't say which version of each browser it used for the tests, but notes in the small print that the results are based on average times and that battery life varies significantly with settings, usage, and other factors.

However, it has updated the GitHub page it used to support the similar battery performance tests that it conducted last year. Here, Microsoft reveals the new tests used Edge 16, Chrome 62, Firefox 56 and 57, and Opera 49, so Microsoft is actually using current and near-current browsers. It's also released details about its methodology.

A sample was taken for each browser on each laptop. These computers were all configured with display brightness at 50 percent and volume on mute, while location and Bluetooth were disabled. Microsoft enabled quiet hours, temporarily disabled updates, and disabled the ambient light sensor.

All devices were connected to a wireless network, but were unplugged and running on battery, Windows Defender was running, Windows Battery Saver mode was set to activate at 20 percent battery, and the cache was cleared on each browser. Additionally, each browser was set to playback HTML5 video at 720p.

Microsoft's battery life video is one of two pitting Edge against Chrome.

Microsoft says dialing back Adobe Flash in Edge in the Windows 10 Creators Update has made it the most energy-efficient browser of all.

Google: Chrome is now loading pages up to 20 percent faster than a year ago

Google has done away with a benchmark that was encouraging Chrome's V8 developers to optimize for sites that most people don't visit.