Microsoft's flagship productivity product, Office, has always felt like a second-class citizen on the Mac. That changes today, with the release of a preview version of Office 2016 for Mac, now available for anyone running OS X Yosemite. 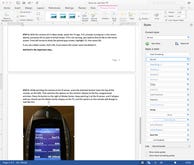 I've had a few days to try out the new Office apps ahead of their public release. Here's what you can expect. (My colleague Mary Jo Foley has the details about the public preview, including download links.)

The preview consists of three new apps -- Word, Excel, and PowerPoint -- plus updates to the Outlook and OneNote apps that were already available as previews. On my Mac, the new apps run side by side with Office for Mac 2011, making it easy to compare old and new.

For Mac users, the new user interface is a radical (and long-overdue) refresh of the classic Office look and feel.

In Office for Mac 2011, the mix of toolbars, menus, and ribbons is downright ugly. The revised design closely resembles Office 2013 for Windows, with Save, Open, Undo, and Redo buttons alongside the window controls in the title bar; all other commands are clustered in a single ribbon that can be collapsed for a clutter-free experience. Compare the clean new look (top) with the old, messy Office 2011 design.

If you've used Office 2013 on a Windows PC, the experience of switching to the new Mac version will feel very familiar, Microsoft is trying with this release to unify the interface across multiple platforms.

In addition, the experience of creating a chart in Excel is nearly identical in Office 2016 on the Mac as it is in Office 2013 for Windows. Overall, it's an enormous improvement over the kludgey mess of buttons and menus in Office 2011.

Unsurprisingly, the new Office for Macs continues Microsoft's relentless push toward the cloud. To open or save a file, you'll use the Mac version of Backstage view. OneDrive and OneDrive for Business locations are at the top of this list, although you can still override cloud storage and save files locally using the On My Mac shortcut.

One feature that Mac users get ahead of their Windows counterparts is visible in the above screen. Opening a OneDrive folder shows files stored in your own OneDrive account but also shows OneDrive folders and files shared with you by other users.

There are also additional collaborative features, including threaded comments for Word documents.

In general, as a longtime Office for Windows user I found the three new apps in the Mac suite to be sufficiently feature-rich for productive use. The one app where I felt short-changed when switching to the Mac is Outlook, which is considerably simpler than its Windows counterpart.

The latest preview release of Outlook 2016 for the Mac has a few nice features, including conversation view and the ability to review drafts and junk mail for multiple accounts in a single location.

Outlook 2016 for the Mac supports Outlook.com (Hotmail) accounts in IMAP mode only. It also supports Gmail, iCloud, and Exchange-based accounts, including Office 365. One feature I desperately missed from Outlook 2013 for Windows is the ability to specify that I only want to sync a limited selection of messages for a specific account.

Overall, this is a very promising preview. If you use Office on the Mac, and especially if you have an active Office 365 subscription, it's well worth the download.