That's the upshot of Workday's planned acquisition of Platfora, a deal announced last week that left questions about the fit between the two companies and the future of the acquired big data analysis vendor. To answer some of the lingering questions, Workday executive Mike Frandsen, EVP of Products, Support and Delivery, and Platfora executive Peter Schlampp, VP of Products, briefed Constellation Research on what the deal will bring. Here are a few of the highlights.

On Platfora's future: Platfora's current version will be the last to be offered as on-premises software, said Frandsen. Workday will continue to support Platfora's existing software on all currently supported versions of Hadoop and Spark into 2018 and will honor all contracts. A future product based on Platfora's technology will be a Software as a Service (SaaS) on Workday's cloud platform. That offering will not be marketed as a standalone big data analysis service; rather, it will enhance Workday's current analytical capabilities, as detailed below. 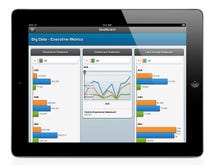 Workday's big data play: The gateway drug to financials? The analytics applications are key to Workday's expansion plans since they act as a bridge from HR to financials.

On blending Workday and Platfora capabilities: Workday has more than 40 customers using its Hadoop-based Workday Big Data Analytics Platform, introduced in 2013 and based on Datameer technology. That service enables customers to import and analyze third-party data in aggregate alongside Workday data, but the company said it does not give them the ability to drill down or slice into that data. Tapping Platfora's in-memory Data Lenses, "non-Workday data will be a first class citizen" and users will be able to "drill down and slice that data into different pivots or dimensions".

Platfora self-service data prep and data visualization capabilities will also figure in Workday's enhanced offering, said Schlampp. But it won't be a complete "reboot" of Workday Big Data Analytics, said Frandsen. Instead, Workday will rationalize functionality for different user personas drawing from "an abundance of great tools" for preparation and analysis of data on Hadoop.

On supporting deeper Workday analyses: Platfora's expertise in behavioral analysis is not limited to customer analysis. That has been a focus area for the company, but behavior analysis will be equally applicable to HR and financial analyses. For example, in the HR arena, behavioral analysis will help companies understand the behaviors, strengths, motivations, and likelihood to retain employees and potential employees. Further, Workday said it's contemplating cohort analysis of employees based on hire date, compensation, manager, organization, work location, or any combination of these attributes.

On the finance side, Platfora will help Workday better understand the profitability and value of customers and prospective customers, their satisfaction, their likelihood to remain customers, and their likelihood to pay their bills in a timely way. Current and potential partners and suppliers might be evaluated in the same way, and all of the above would advance insights on the profitability of business units and locations.

My POV on the Workday-Platfora plans

I stand by my initial take on this deal in seeing it as a boon for Workday customers, but it's now clear that change is ahead for existing Platfora customers. Schlampp said he expects customers will continue to use Platfora "for many years to come", but I think that's optimistic. I expect customers to look to competing products as their subscription-based licenses to use Platfora expire (whether it's used on-premises or with cloud-based Hadoop deployments on AWS, Google, or Azure).

About one third of Platfora customers (I don't have an exact count, but it's said to be "dozens") are also Workday customers. I would expect few if any of these customers to abandon existing Hadoop deployments and move all their data and analyses onto Workday. That said, these joint customers may well use and appreciate Workday's Platfora-enhanced HR and financial analyses. And if that's the case, they would surely load more HR- and finance-relevant data and third-party data onto Workday's platform as a result.