Xiaomi to invest $7.2 billion in 5G, AI, and IoT over five years

Xiaomi is facing stiff competition in its core smartphone business as other Chinese Android-makers, especially Huawei, continue to erode the market shares of smaller players.
Written by Cyrus Lee on Jan. 2, 2020 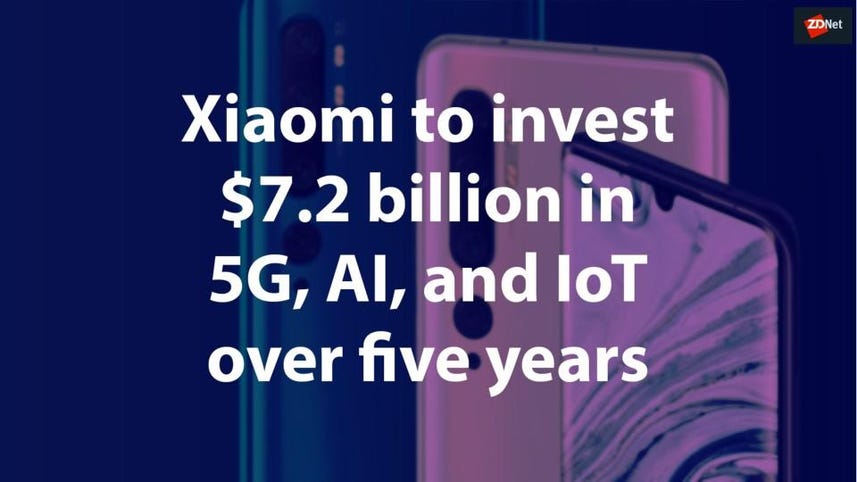 Chinese smartphone vendor Xiaomi will invest at least 50 billion yuan ($7.2 billion) on 5G, artificial intelligence (AI), and Internet of Things (IoT) over the next five years as the budget phone maker is trying hard to maintain healthy business growth in the face of challenging smartphone sales.

2020 will be the year of breakthroughs for Xiaomi's 5G business, Xiaomi founder Lei Jun wrote in a new year's letter to his employees on WeChat, saying it will be a critical year for the company in its bid to push forward with smartphone and AIoT (AI+IoT) strategy -- the two core growth engines of the company.

The Beijing-based company, which initially planned to allocate about 10 billion yuan over the next five years into 5G, AI, and IoT when it first brought up the idea of "All in AIoT" in early 2019, decided to beef up investment as it has fully verified its feasibility and correctness as well as the necessity for the strategic investment, the letter said.

"In the arena of '5G+AIoT', we will invest at least 50 billion yuan in the coming five years," said Lei, who believes the new strategy will turn into an "absolute victory in all smart scenarios".

Xiaomi is facing stiff competition in its core smartphone business as other Chinese Android-makers, especially Huawei, have continued to erode the market shares of smaller players. In the third quarter of 2019, Xiaomi's smartphone shipment figures slumped 30.5% year on year in China while its global shipments also declined by 3.3%, according to IDC research notes.

The Chinese company relied heavily on growth from overseas markets and non-device segments as smartphone sales and shipments both declined in the past quarter. Smartphone shipments and sales income during the three months to September declined by 3.6% and 7.8% year on year, respectively, although revenue in the quarter increased by 5.5%.

With the first working day of 2020, January 2, marking the beginning of the 10th year of Xiaomi since its inception, Lei also shared in the letter Xiaomi's "unprecedented record" of becoming the first smart TV brand to have ever shipped more than 10 million units in China within a year during 2019.

The letter also announced that Xiaomi has recruited Chang Cheng, a former smartphone business unit head of Lenovo China, to join the company as a vice president of mobile-phone product planning. Lei added that the company would continue to hire outstanding talent from all over the world who truly reflect the company's values.

"I urge all Xiaomiers to stick with five guidelines, that we must make friends with our users, maintain the cost-effective strategy, prioritize technological innovations, insist to provide best quality products, and stick to our entrepreneurial mindset and fighting spirit," wrote Lei.

You get a lot of handset for your money with the Mi Note 10, especially in the camera department. However, performance is middling, and there are some missing features.

How Xiaomi dethroned Samsung to become the king of Indian smartphones

From 3% market share in 2016 to around 30% today, Xiaomi has caught up to the mighty Samsung and even surpassed it. But can it hold on for the long haul?

Xiaomi is building on growth from overseas markets and non-device segments as smartphone sales and shipments both declined in the past quarter.

Android 10's features will transform some phones into more user-friendly, customizable, and secure environments. Here's what developers, businesses, and users need to know about Google's Android 10.0.

Broadband
Samsung Galaxy Z Flip 4 vs Motorola Razr 2022: Preorder the Flip or wait for the Razr?

Smartphones
After Samsung Unpacked: What does the foldable phone market look like now?