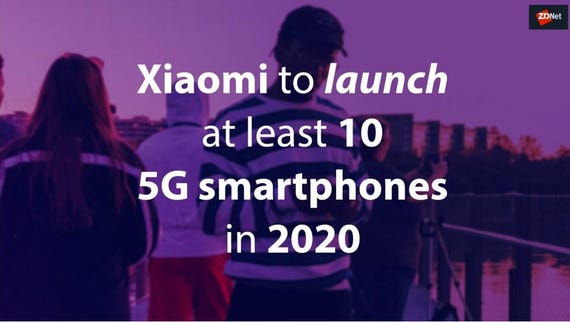 Chinese budget phone maker Xiaomi aims to launch about a dozen of 5G smartphones next year as the company plans to quickly make 5G devices just as common as 4G phones.

The Beijing-based company will launch at least 10 models of 5G smartphone in 2020, Xiaomi's founder Lei Jun said during the company's developer conference held in Beijing on Tuesday.

In the first half of 2020, mid-to-high-end Xiaomi smartphones priced above 2,000 yuan (US$285) will all be 5G-enabled devices, and Xiaomi aims to launch 5G phones that could cover the full range of prices from the lower to the higher end, according to Lei.

Although Chinese smartphone brands have started introducing 5G phones this year, even before the official commercialisation of the network in the country, Lei believes that demands for 5G devices will only take off when a large number of local consumers are wiling to change their handsets into 5G-enabled ones.

Earlier this month, the three state-backed telecom operators all introduced similar 5G plans for local consumers, but the coverage remains limited only to major Chinese cities and key areas in lower-tier cities for the initial rollout.

But sales of 5G devices in China, the world's largest smartphone market, remain a nominal part as only 219,000 5G smartphones were sold in China in August, which accounted for 0.7% of the overall 30.8 million units of handsets sold in the country during that month, according to data from the government-backed China Academy of Information and Communications Technology.

After Xiaomi unveiled its Mi Mix 3 5G handsets during the MWC in February, the company in September further introduced its the 5G version devices for its flagship Mi 9 model, which started from 3,699 yuan (US$520), one of the cheapest offering seen in the market so far.

While Xiaomi said that it will introduce the first 5G smartphone that supports both standalone (SA) and non-standalone (NSA) networks next month, its major competitors Oppo and Vivo have also announced plans to introduce phones supporting both networks in December.

5G is fine, ARPANSA has said, and a single study does not make for scientific consensus.

5G is on track in China, but will it pay? (TechRepublic)

Commentary: Recent data from China suggests 5G is on track, but will it pay off?

Join Discussion for: Xiaomi to launch at least 10 5G smartphones...