Users will now have until October 28 before Yahoo stops new content from being uploaded onto Yahoo Groups.
Written by Aimee Chanthadavong on Oct. 17, 2019 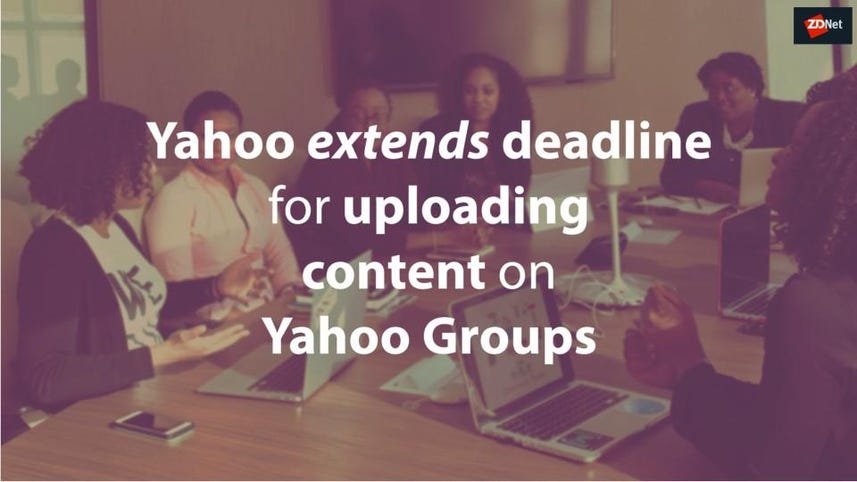 Yahoo has extended the deadline for when users will no longer be able to upload new content to its free, long-running online discussion boards, Yahoo Groups.

Yahoo had originally set the deadline for October 21 and has now updated it to October 28.

It comes as Yahoo announced yesterday that it would be permanently removing all content from Yahoo Groups from December 14.

Yahoo encouraged users who still wish to share information and files with their groups to do so via email.

"You'll still be able to communicate with your groups via email and search for private groups on the site," the company said.

Yahoo did not cite a reason for its decision to wind down its Yahoo Groups site.

The decision is expected to impact UK-based telco Ofcom.

According to a 2015 report [PDF] prepared by Simwood, a UK telecom, that was shared on Twitter, Ofcom uses Yahoo Groups to manage its phone number assignments.

"A review might consider whether it is befitting for the world's sixth largest economy to manage critical national infrastructure via a Yahoo group but we would hope that is obvious," the report read.

However, in its defence, Ofcom replied stating that Simwood's claim was not "entirely accurate" and that Ofcom does not rely on an online group for number management.

"Ofcom manages UK telephone numbers through our official database -- not online groups. This particular group is simply one informal way phone companies can let each other know when they have been allocated blocks of numbers by Ofcon. This information remains available to phone companies through our website," the company said.

Ofcom added that if new phone number assignments are allocated to phone companies, Ofcom updates its "site weekly with the allocation information, but we don't actively notify all of the phone companies as they're aware of the regular update schedule".

Despite this, there is a group on Yahoo Groups named Ofcom Number Activation Group that says it was established by Ofcom to "allow communications providers that have been allocated telephone numbers by Ofcom, to contact each other for activation purposes".

$50 million was too low for one of the largest data breaches on record.

Altaba to sell remaining Alibaba shares and shut down

The remaining Alibaba shares are expected to generate around $40 billion for Altaba stockholders.

The 5 best fantasy football apps of 2022

The 5 best fantasy football apps of 2022