The one-sided encryption debate continues. Now, it's being used as a tool to spread what's commonly known as "fear, uncertainty, and doubt."

If you ventured to Reddit this weekend, you might have read a startling claim by the Manhattan district attorney's office, who last week released a report into smartphone encryption and public safety.

"Google can reset the passcodes when served with a search warrant and an order instructing them to assist law enforcement to extract data from the device. This process can be done by Google remotely and allows forensic examiners to view the contents of a device."

But there's a problem: that's only half of the story. And while it's true, it requires a great deal more context.

The next few lines read:

"For Android devices running operating systems Lollipop 5.0 and above, however, Google plans to use default [device] encryption, like that being used by Apple, that will make it impossible for Google to comply with search warrants and orders instructing them to assist with device data extraction."

If you thought you heard that before, that's because you have.

Google, which develops Android, said in its "Lollipop" 5.0 upgrade two years ago it would enable device encryption by default, which forces law enforcement, federal agents, and intelligence agencies to go to the device owner themselves rather than Google.

This so-called "zero knowledge" encryption -- because the phone makers have zero knowledge of your encryption keys -- also led Apple to do a similar thing with iOS 8 and later. Apple now has 91 percent of its devices using device encryption.

Here's why Google has an Android security problem

Opinion: Security is everyone's responsibility, not just those with the cash to upgrade.

It took a year, but Google got there in the end.

The US government, and its law enforcement and prosecutors were concerned. They have argued that they need access to device data, but now they have to go to the very people they are investigating or prosecuting.

Only a fraction of Android devices, however, are protected.

And that is a problem -- at least for Google. Despite wanting to wash its hands of any complicity in handing over user data to the government -- something it has been vocal about in recent months -- it still has to in the very vast majority of cases. 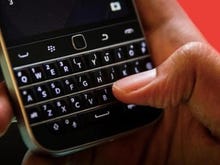 BlackBerry, once a security pioneer, falls behind on privacy, transparency

The phone maker said it has "no plans" to release a transparency report into how many government demands for data it receives.

Carriers, which argue they need to test Android updates before rolling them out to their customers, are the biggest barriers in the way of getting a software upgrade. The sad fact is that most devices never see software upgrades, forcing users into old and unsafe software, or into cashing out for a new device.

Security is everyone's responsibility, not just those with a carrier willing to make the leap, or for the others with the cash to upgrade.

If there's one lesson in today's story: You don't have to believe everything you read, but at very least read the whole thing before you panic.

Google did not immediately respond to a request for comment on Sunday.