While health and fitness tracking platforms have long been popular with runners and quantified selfers, the arrival of Apple's HealthKit has caused a new group to get interested: insurers.

A couple of months after HealthKit was announced, rumours surfaced that Apple was already in talks with insurers about integrating the health and fitness data that HealthKit gathered with those insurers' products. Some viewed the news as a positive development -- a chance to cut their insurance bills by following a healthier lifestyle; for others, it was a worrying threat to privacy and a chance for insurers to jack up policy prices for those who couldn't, or wouldn't, get fit.

Since then, a handful of insurers have begun to tie Apple's HealthKit, and platforms like it, into their own products. UK-based VitalityHealth, for example, lets customers share data from their Fitbit, Misfit, Polar, or Garmin devices, while US-based Humana also has HealthKit support alongside integration with Nike, Garmin, Fitbit, and other products as part of its own Vitality rewards program.

"This is a great way for us to get verifiable data about members' performance and provide rewards to them for creating those good behaviours and maintaining that type of healthy lifestyle," Joe Wood, CEO of HumanaVitality, said.

While the number of insurers using data from health tracking programs in their products is very low, it won't stay that way for long: a recent study by Accenture found two-thirds of insurers expected wearable technologies to be broadly adopted by their industry over the next two years. Accenture also noted that one insurance company had already been handing out fitness trackers to customers and cutting premiums for the healthiest among them. 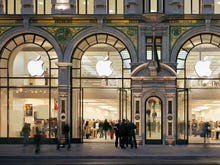 "While insurers have traditionally based their underwriting and pricing processes on a limited view of certain customer variables, emerging technologies such as wearables and other connected devices can help insurers break from their traditional business models and provide outcome-based services for their customers," John Cusano, senior managing director of Accenture's global Insurance practice, said.

From the insurers' perspective, such pricing is a natural extension of their existing business model: cutting insurance costs for lower risk customers, raising them for higher risk ones. Much as life insurance for a 65-year-old smoker that likes skydiving and motorbike racing is not the same as that for a 25-year-old non-smoker that prefers hiking, so wearables allow insurers to offer cheaper products for those that exercise and eat healthily, and more expensive ones for those that don't.

Seen from another perspective, it's a way of penalising those who may be unable or unwilling to follow the prescribed lifestyle, and tax them accordingly. And, with employers encouraging workers to adopt healthier lifestyles to cut their worker insurance bills, now your boss has an interest in whether you go jogging and eat your greens too.

However you view it, the growing popularity of wearables is likely to be the first step in an era of ever more personalised insurance.

However, it will be a long and difficult road before insurers can use data from HealthKit, Jawbone, or any other provider to offer a truly tailored premium.

"The way that underwriting platforms work at the moment, they're not set out for customer interactions -- they're built to generate a one-time quote and what your insurance is going to cost you, and perhaps change that according to whether you've made any claims," Oliwia Berdak, a senior analyst at analyst Forrester, told ZDNet.

As well as needing to make significant progress in interrogating the data for the company's benefit, insurers will need to work out how to do the same for their customers' info.

"Most customers don't really care about the data. What would be useful for them is if someone went and made connections between the different data sets, made some meaningful conclusions, and provide some real time insight... At the moment, no one has done that. Doing that will be very, very difficult for several reasons: data standards, getting business value out of that would take a lot of effort, skill, and money invested to make that possible," Berdak said.

For now, insurers are using the data from health and fitness trackers not for underwriting -- or indeed, even true insurance products -- but largely for rewards programs. For those who share data that says that they have taken a certain number of steps or exercise, for example, they can earn discounts on, say, healthy food at their local supermarket. Such rewards are often combined with apps or online services that offer healthcare and good eating tips, and help users set fitness goals.

The rationale behind such programs is for insurers to get more engagement from their customers. Rather than just being a company that customers call on only seldom -- to renew a policy or make a claim -- by offering programs that track their health data, insurers can be a more regular part of their customers' lives.

"Historically in the industry we did have lots of insurers that would say, 'I'm going to give you $50 to take this health assessment or I'm not going to provide access to health benefits if you don't take the assessment', but that's a once-and-done. Once that event is over, it doesn't do anything to generate behaviour change in a sustained way... For us, it's a more of an engagement play, because that's the way you're going to move a population towards better health overall," Christine Mullen, VP of health and wellness solutions at Humana, told ZDNet.

And by setting goals and linking the devices to their insurance, insurers can give those who bought a fitness tracker a reason to keep using it after the novelty has worn off.

"Within the industry itself there's always question of sustainability, and we're finding that by coupling and surrounding the experience with rewards and incentives, it's actually helping to support the sustainability that the device industry alone lacks," Mullen said.

Rather than being purely about underwriting, insurers' interest in fitness trackers goes beyond an ability to track your sleep or jogging habits.

That's not to say that there isn't value to the insurers from the data that fitness trackers generate -- it's just not the data you think. Rather than your day-to-day sleep and health tracking, insurers may well be more interested in the simple fact that you own a fitness tracker at all: if you've already got a Fitbit or you're happy to share your HealthKit data, chances are you're already the sort of person that insurers want on their books.

Join Discussion for: Yes, insurers want your health data - but...