The financial news website came under fire for doxxing a Chinese scientist accused of being behind the virus.
Written by Charlie Osborne, Contributor on Feb. 3, 2020 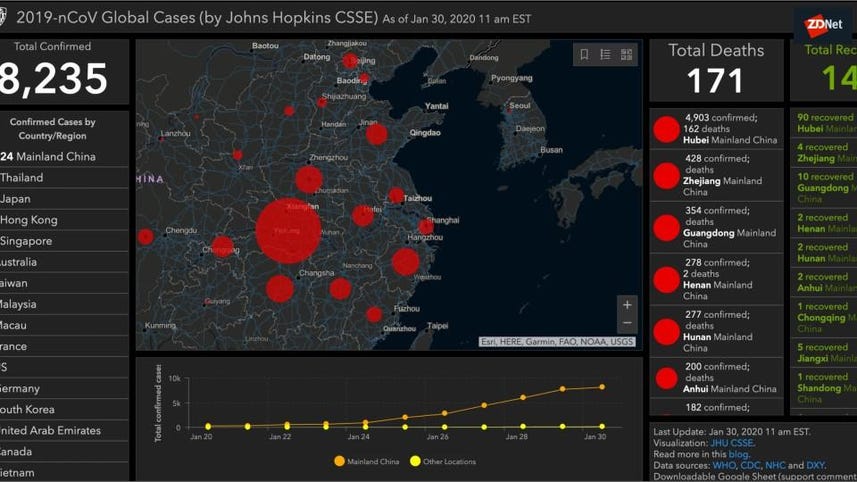 ZeroHedge has been permanently suspended from Twitter following a complaint stemming from an article that suggested a Chinese scientist was linked to the creation of the new coronavirus strain as a bioweapon.

The financial markets news website was the subject of a recent Buzzfeed report which examined the article -- still online at the time of writing -- which connected a Wuhan-based scientist to the virus.

ZeroHedge claimed, without evidence, that the scientist was involved in the development of the "weaponized" coronavirus strain.

In addition, the publication doxxed the scientist by publishing his name, photograph, contact details, and the added comment, "Something tells us, if anyone wants to find out what really caused the coronavirus pandemic that has infected thousands of people in China and around the globe, they should probably pay [the scientist] a visit."

ZeroHedge received a notification on Friday that the outlet's account would be suspended due to claims of violating Twitter's "rules against abuse and harassment."

It was originally thought the suspension was due to a separate ZeroHedge article on the composition of the virus; however, the ban was due to the doxxing article. Before its suspension, the account catered for over 670,000 followers.

Last week, Twitter said there have already been over 15 million tweets related to the coronavirus and while no "significant coordinated attempts to spread disinformation at scale about this issue" has been detected at present, the firm warned publishers that "those who engage in these practices will be removed from our service."

The emergence of the coronavirus outbreak has prompted a rash of conspiracy theories, including the apparent source of the outbreak being Chinese labs or bat soup; fake cures including bleach washes, and the virus itself apparently a creation subject to a patent.

Facebook is also attempting to tackle the spread of disinformation with a team of fact-checkers. Notifications are being sent to users who have shared fake coronavirus content and some organizations are being offered the chance to run free coronavirus education ad campaigns.

The World Health Organization (WHO) has declared the spread of novel coronavirus as a global health emergency. Hundreds of people in China have died, the US has cautioned travelers against going to the country, and other countries including the United Kingdom are attempting to repatriate citizens and fly them out of Wuhan. According to Worldometer, over 17,000 cases have been reported.

Disease experts are becoming increasingly concerned that the virus may become a global pandemic, with countries less-equipped to deal with the emerging illness and with more fragile healthcare systems being potential hotspots for contagion.

Researchers from IBM recently discovered cybercriminals who are targeting Japanese citizens by pretending to be a disability welfare service provider, taking advantage of panic in order to spread malware. Phishing emails claim that coronavirus cases have been reported in the Gifu, Tottori and Osaka prefectures in Japan and urge recipients to read an attached leaflet that contains the Emotet Trojan.