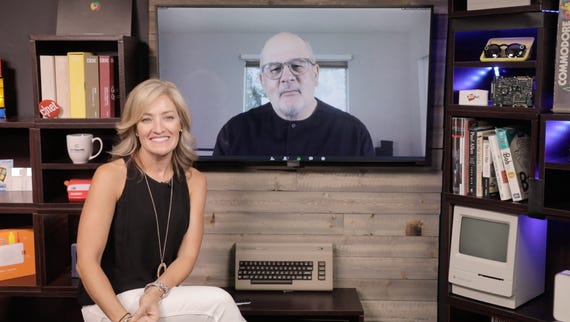 It's hard being an emperor.

You walk down the street in your finest gray T-shirt and jeans ensemble and people claim you're naked.

You can surely grasp, then, that Facebook CEO Mark Zuckerberg finds other human beings frustratingly myopic.

If only they could see what he sees.

Thankfully, The Verge got hold of audio of an in-house meeting, in which Zuckerberg tried to explain how he is the least cynical, least uncaring, and most prescient man in the world.

It was almost presidential.

Many have dwelled on his admission that, if Elizabeth Warren becomes President and tries to break up Facebook, Zuckerberg will fight her in the courts and win. Because he's always good at predicting the future.

I, though, was far moved by his answer to an employee who wondered what they should say to someone skeptical of Facebook's beatific goodness.

Zuckerberg began his answer with a curious statement: "Well, look, I think humanizing stuff is always really important. So, I've always focused more on the substance and trying to deliver things, and a little bit less on the perception. And I don't think we have that luxury anymore."

Could this be an admission that Zuckerberg has suddenly grasped that human beings are, well, human? Could it be that previously all he cared about was gaining power at all costs and disregarding any human feelings?

Well, now he believes that humans are focusing on the issues, and it's a little uncomfortable for him. Before, one assumes, they were merely focusing on securing the maximum number of friends and likes.

In this meeting, Facebook's CEO bared his soul about the brickbats that hurt him most.

You know, I feel he has a point. That's exactly what many people think, principally because it's been shown, time and again, to be astoundingly true.

From the earliest stages of Facebook, when the company showed a complete disregard for users' privacy, it was evident that power, money and the copying and destruction of all competition was all.

It's only recently, when Facebook was implicated in perhaps helping alter the fate of democracy in several countries, that Zuckerberg suddenly experienced peculiar conversion therapy.

When you've been fined $5 billion by the Federal Trade Commission, it may not be much money to you, but the perception is that you're a considerable fraud.

But wait, Zuckerberg wants his employees to know how to do one thing to fight the critics.

He said: "I think it's tough to break down these perceptions and build trust until you get to a place where people know that you have their best interests at heart. So that's one thing that you all will be well-suited to do as ambassadors, if you choose to be, having spent time here, as I think you know the heart of this place at this point."

Where Facebook has failed, it seems, is in explaining to the people on whose back it's made its fortune, and that the company has their best interests at heart.

Zuckerberg knows what your best interests are far better than you do. He's merely failed to communicate them to you because he's been far too focused on the substance.

You can understand his frustration, surely.

Join Discussion for: Zuckerberg is frustrated because people don't...