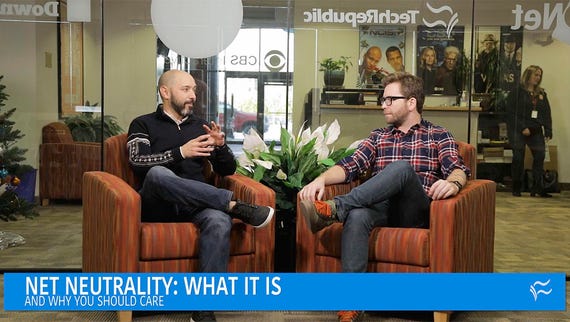 Net Neutrality: What is it and why should you care?
Watch Now

"I read it on Google," I've heard people say about news articles they discovered on their smartphones that proposed some new and intriguing fact -- something about the polar ice caps, maybe, how they're melting or freezing over again or exploding, whatever ice caps do nowadays. Never mind that their publishers may have been The New York Times or CBS News or Russia Today or even The Onion. It was a topic they either found by querying Google, or that they asked Google by voice to read to them, or that Google News condensed for them and printed among its list of most intriguing headlines. They don't know who actually printed it, nor do they really care.

"Can you get Google on your iPhone?" I heard another person ask at the same table. "Or does Apple still ban Google?"

Some of us whose heads are still stuck in the 2000s, perhaps in want of refuge from the present decade, lost track of when the Web stopped being a thing for most people.

Last month, I accompanied my wife and daughter through Grant Park in Chicago on a very soggy weekend, as they participated with thousands of other folks in a festive, phone-based event for the game of Pokemon Go. If you've never seen this in action, it's an extraordinary spectacle. Imagine thousands of smartphones pretending to be windows into another dimension inhabited entirely by fantastical creatures, and each of these phones serving as a butterfly net to capture and catalog them into its database.

Connectivity has evolved into the stuff that festivals are made of now. It's an extremely clever idea to tie the functionality of a game to the geography of our world, kicking our butts away from our desktops so that, even if coincidentally and for the silliest of reasons, we come together as a community. Too much divides us as a people today for us to frown at anything that brings us closer.

At a more technological level, Pokemon Go is emblematic of who we have become as consumers of this thing called "content." Granted, a small, though measurable, minority of the human race plays this game. Yet, as an application, it represents the extent to which software architecture can evolve, and how quickly, when there is a rational business model behind it. Pokemon Go is a colossal distributed functionality platform, leveraging the HTTP protocol for connectivity but using Kubernetes to extend it far beyond the confines of the old Web.

Pokemon Go, Netflix, AWS, Azure, and even the much-maligned Facebook, are all not only expansive services but marketplaces unto themselves. Each has had a hand in remaking the Internet in a new and more capable model.

In the light of this revelation, it's perhaps a bit past time for us to revisit this whole idea of net neutrality.

When the phrase was coined, it was in the context of a debate in the US Congress over the idea of a possible nationwide license for broadband service providers. States and municipalities were responsible for granting such licenses to limited geographies, and Republicans in the House were looking for new sources of revenue. Under the provisions of a never-passed law called the COPE Act, ISPs would be given incentives to purchase nationwide licenses instead of more localized ones. One such incentive was a waiver of enforcement of any laws or regulations restricting ISPs' right to divide their pipelines into "good/better/best" service tiers.

There was substantive opposition, but Sen. Ron Wyden (D – Oregon) raised the stakes to a moral issue. At issue, he argued, was the small publisher's and garage-based enterprise's right to conduct their business on the same Internet like Google and eBay, as equal players in a digital market.

Politically speaking, the concept of net neutrality has been as malleable as sediment from an Oregon mudslide. But over the last few decades, Congress has been unwilling to bake that clay into anything permanent. So in 2010, the Federal Communications Commission, under then-Chairman Julius Genachowski, unveiled a regulatory framework designed to stop the leakage from the gaping hole in federal regulations. No one should presume the authority, the framework said, of diverting Internet traffic or blocking access to content, so long as that destined content is legal.

That sounds like an altruistic statement of fairness. But it has two fatal flaws. First, it is not up to a regulatory agency to decide for itself what's fair and unfair -- that's for the law to codify. The current argument that US Immigration and Customs Enforcement has overstepped its bounds in conducting raids without just cause is precisely this same argument: An agency doesn't get the right to issue proclamations on behalf of some self-declared monarch.

The second flaw was made evident by all those folks in Grant Park capturing bulbasaurs, pidgeottos, and raticates: Not all Internet services are created equal. Some justify the premiums that consumers are willing to pay.

When net neutrality became a cause célèbre, back before the world caught on fire, the Web was framed as the modern reformation of the "public airwaves." It seemed logical to many that the FCC would be the proper enforcer of fairness in this new, digital marketplace.

Except that whole "marketplace" thing was the problem. The Telecommunications Act of 1996 renders unto the FCC the authority to regulate an electronic signal-based medium under two conditions: if it's an information service like a broadcaster (Title I) or if it's a communications service like a telephone (Title II). If it's a marketplace, then the law (where we have one) specifies the Federal Trade Commission should be its overseer.

So if the Internet is as expansive and inclusive as the Genachowski framework painted it to be, then his agency should withdraw from acting as its authority. That's eventually what happened.

In the absence of a regulatory framework, however, the evolution of our relationship with content has resumed unimpeded. Although Netflix and  Amazon Prime have been compared in status to the NBC, ABC, and CBS networks of the 1960s, the truth is, none of these modern-day channels are generally considered institutions, keepers of the public trust, bearers of the Seal of Good Practice. When word spread that the streaming show "Good Omens" was about a demon and an angel who conspire to thwart the coming apocalypse, thousands protested Netflix demanding the show's removal, not thinking for one moment that any other streaming service besides Netflix (in this case, Amazon Prime) existed.

We subscribe to content now; all these sites or carriers or services or streaming providers (whatever you want to call them) are little more than buttons and menu pathways that lead folks to it. Playlists -- the modern form of broadcasting schedules -- no longer belong to behemoth broadcasters but individual viewers and listeners. The reason people think so poorly of their service providers (which shall remain nameless so that this doesn't become one more opportunity to pile on poor Comcast) is that they get in the way of a more direct relationship between ourselves and our content. In this environment, technology is not so much perceived as the enabler but as a burden -- something that should either be streamlined or circumvented.

But we can expedite that process, and perhaps get a real and truly vital discussion going as to what "fairness" means, if we can finally agree that the 2010 version of net neutrality is about as pertinent today as new regulations governing the conduct of callers on party lines. It would astonish a great many people to learn how their streaming media traffic, their cloud-based functionality, and even their face-to-face communications, bypass the public Internet in favor of direct, higher-speed, fiber optic media. The "net" in any modern vision of net neutrality needs to be cast a lot wider. And before we do that, we all need to become more aware of what this network of networks has truly become.

Join Discussion for: Does net neutrality still matter in our post-web...