Following launches in West Africa, the South Korean telco is set to expand the rollout of its epidemic prevention platform to Southeast Asia as well.
Written by Cho Mu-Hyun, Contributor on Sept. 8, 2019 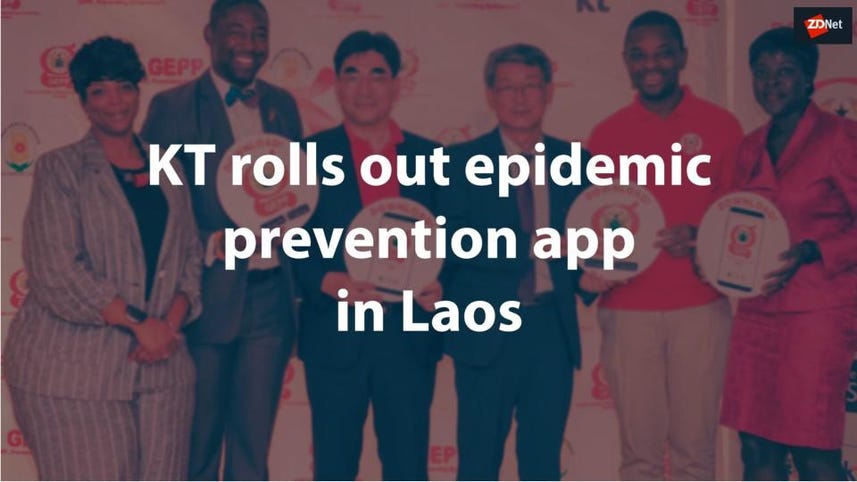 The mobile carrier has been working with Lao health authorities and their counterparts in South Korea to launch the Global Epidemic Prevention Platform (GEPP) in Laos.

GEPP will alert Laotians of nearby contagions, their symptoms, and how to avoid contracting them. Civilians that have visited affected areas can also report their symptoms to nearby health centres through the app.

The project will also allow the Laos government to collect data from GEPP app so that it can monitor contagion progression.

KT said dengue fever and measles were on the rise in Southeast Asia, with the number of overall medical patients in Laos having increased by 42 times in 2019 compared to last year.

The launch of GEPP in Laos will help local authorities tackle these illnesses as well as prevent its spread globally, the telco said, as it has plans to further expand the service to other parts of Southeast Asia going forward.

KT is also working to roll out a trial project in Laos that would use fingerprint recognition to register the vaccination history of children.

KT in 2016 proposed that telcos around the world share data to prevent contagions. In the same year, it also signed a memorandum of understanding with the United Nations to build a big data system dedicated to global contagion prevention.

KT launched GEPP in Ghana last month and is currently working with Kenyan telco Safaricom to launch there as well.

The app will alert Ghanaians of areas effected by epidemics such as ebola and connect them to nearby clinics.

KT to expand deployment of 5G inside buildings

KT will begin 5G services within large and crowded buildings such as airports and train stations.

This flu season is one of the worst in recent history, and data analytics are being used to help track activity across the nation.